The Wizard of the Sea A Trip Under the Ocean 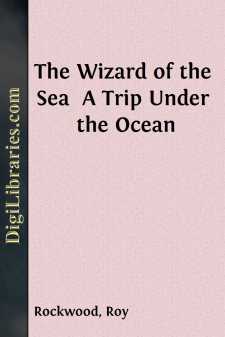 CHAPTER I. INTRODUCING OUR HEROES.

"Well, I declare; Mont Folsom, what is the matter with you?"

"Matter? Nothing is the matter, Tom, only I'm going to a boarding school—just the best place on the face of the earth, too—Nautical Hall, on the seacoast."

"Humph! I didn't know as how a boarding school was such a jolly place," grumbled old Tom Barnstable. "They'll cane ye well if ye git into mischief, lad."

"Will they, Tom? What for? I never do any wrong," and Mont Folsom put on a very sober face.

"Jest to hear the lad! Never do no mischief! Ha! ha! Why you're the wust boy in the town fer mischief, Mont—an' everybody knows it. A nautical school, did ye say. Maybe they'll take ye out in a ship some time in that case."

"They do take the pupils out—every summer, so Carl Barnaby was telling me. He goes there, you know, and so does Link Harmer."

"Then you an' Carl will make a team—an' Heaven help the folks as comes in your way," added Tom Barnstable decidedly.

"But we are not so bad, I tell you, Tom," said Mont, but with a sly twinkle in his bright eyes.

"Oh, no, not at all. But jest you tell me who drove the cow into Squire Borden's dining room and who stuffed the musical instruments of the brass band with sawdust at the Fourth of July celebration? You never do anything, you little innocent lamb!"

And with a loud guffaw the old character sauntered down the street toward his favorite resort, the general store.

Montrose Folsom continued on his way. He was a handsome youth of fifteen, tall and square-shouldered, with a taking way about him that had made him a host of friends. He was the only son of Mrs. Alice Folsom, a rich widow.

A moment after leaving Tom Barnstable, Mont reached the home of his particular chum, Lincoln Harmer. Throwing open the gate, he espied Link in the barnyard, and made a rush forward.

"That settles it, Mont, you're going with me next term!" exclaimed Link, a bright fellow of our hero's age.

"If I wasn't I'd sing a dirge instead of shouting, Link. Yes, it's all settled, and I'll be ready to start with you Monday."

"Your mother has written to Captain Hooper?"

"I'm to buy a lot of things down to Carley's store and then go home and start to pack up. Come on."

Arm in arm, the two chums made their way to the large general store, where Tom Barnstable was again encountered. Here Mont purchased some extra underclothing his mother said he needed. While he was at this Tom Barnstable came close to him.

That was Tom Barnstable, good-natured and willing to do, but an absolute beggar at the slightest chance.

"I won't forget you, Tom, not I," said the merry-hearted lad. "Here you are," and he slipped a shining dollar into the man's hand. A moment later he called one of the store clerks aside....