The Wits and Beaux of Society Volume 1 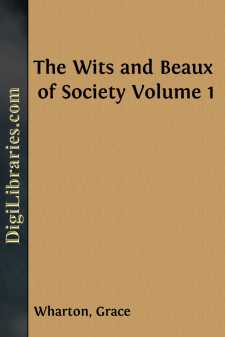 Samuel Pepys, the weather-glass of his time, hails the first glimpse of the Restoration of Charles II. in his usual quaint terms and vulgar sycophancy.

'To Westminster Hall,' says he; 'where I heard how the Parliament had this day dissolved themselves, and did pass very cheerfully through the Hall, and the Speaker without his mace. The whole Hall was joyful thereat, as well as themselves; and now they begin to talk loud of the king.' And the evening was closed, he further tells us, with a large bonfire in the Exchange, and people called out, 'God bless King Charles!'

This was in March 1660; and during that spring Pepys was noting down how he did not think it possible that my 'Lord Protector,' Richard Cromwell, should come into power again; how there were great hopes of the king's arrival; how Monk, the Restorer, was feasted at Mercers' Hall (Pepys's own especial); how it was resolved that a treaty be offered to the king, privately; how he resolved to go to sea with 'my lord:' and how, while they lay at Gravesend, the great affair which brought back Charles Stuart was virtually accomplished. Then, with various parentheses, inimitable in their way, Pepys carries on his narrative. He has left his father's 'cutting-room' to take care of itself; and finds his cabin little, though his bed is convenient, but is certain, as he rides at anchor with 'my lord,' in the ship, that the king 'must of necessity come in,' and the vessel sails round and anchors in Lee Roads. 'To the castles about Deal, where our fleet' (our fleet, the saucy son of a tailor!) 'lay and anchored; great was the shoot of guns from the castles, and ships, and our answers.' Glorious Samuel! in his element, to be sure.

Then the wind grew high: he began to be 'dizzy, and squeamish;' nevertheless employed 'Lord's Day' in looking through the lieutenant's glass at two good merchantmen, and the women in them; 'being pretty handsome;' then in the afternoon he first saw Calais, and was pleased, though it was at a great distance. All eyes were looking across the Channel just then—for the king was at Flushing; and, though the 'Fanatiques' still held their heads up high, and the Cavaliers also talked high on the other side, the cause that Pepys was bound to, still gained ground.

Then 'they begin to speak freely of King Charles;' churches in the City, Samuel declares, were setting up his arms; merchant-ships—more important in those days—were hanging out his colours. He hears, too, how the Mercers' Company were making a statue of his gracious Majesty to set up in the Exchange. Ah! Pepys's heart is merry: he has forty shillings (some shabby perquisite) given him by Captain Cowes of the 'Paragon;' and 'my lord' in the evening 'falls to singing' a song upon the Rump to the tune of the 'Blacksmith.'

The hopes of the Cavalier party are hourly increasing, and those of Pepys we may be sure also; for Pim, the tailor, spends a morning in his cabin 'putting a great many ribbons to a sail.' And the king is to be brought over suddenly, 'my lord' tells him: and indeed it looks like it, for the sailors are drinking Charles's health in the streets of Deal, on their knees; 'which, methinks,' says Pepys, 'is a little too much;' and 'methinks' so, worthy Master Pepys, also.

Then how the news of the Parliamentary vote of the king's declaration was received! Pepys becomes eloquent.

'He that can fancy a fleet (like ours) in her pride, with pendants loose, guns roaring, caps flying, and the loud "Vive le Roi!" echoed from one ship's company to another; he, and he only, can apprehend the joy this enclosed vote was received with, or the blessing he thought himself possessed of that bore it.'

Next, orders come for 'my lord' to sail forthwith to the king; and the painters and tailors set to work, Pepys superintending, 'cutting out some pieces of yellow cloth in the fashion of a crown and C....