The Witch of Atlas 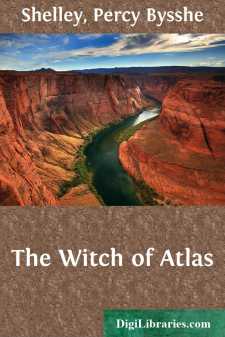 Add to My Favorites
Published: 8 years ago
Downloads: 37
Rating: (0 Votes)

1. How, my dear Mary,—are you critic-bitten (For vipers kill, though dead) by some review, That you condemn these verses I have written, Because they tell no story, false or true? What, though no mice are caught by a young kitten, _5 May it not leap and play as grown cats do, Till its claws come? Prithee, for this one time, Content thee with a visionary rhyme.

2. What hand would crush the silken-winged fly, The youngest of inconstant April's minions, _10 Because it cannot climb the purest sky, Where the swan sings, amid the sun's dominions? Not thine. Thou knowest 'tis its doom to die, When Day shall hide within her twilight pinions The lucent eyes, and the eternal smile, _15 Serene as thine, which lent it life awhile.

3. To thy fair feet a winged Vision came, Whose date should have been longer than a day, And o'er thy head did beat its wings for fame, And in thy sight its fading plumes display; _20 The watery bow burned in the evening flame. But the shower fell, the swift Sun went his way— And that is dead.—O, let me not believe That anything of mine is fit to live!

4. Wordsworth informs us he was nineteen years _25 Considering and retouching Peter Bell; Watering his laurels with the killing tears Of slow, dull care, so that their roots to Hell Might pierce, and their wide branches blot the spheres Of Heaven, with dewy leaves and flowers; this well _30 May be, for Heaven and Earth conspire to foil The over-busy gardener's blundering toil.

5. My Witch indeed is not so sweet a creature As Ruth or Lucy, whom his graceful praise Clothes for our grandsons—but she matches Peter, _35 Though he took nineteen years, and she three days In dressing. Light the vest of flowing metre She wears; he, proud as dandy with his stays, Has hung upon his wiry limbs a dress Like King Lear's 'looped and windowed raggedness.' _40

6. If you strip Peter, you will see a fellow Scorched by Hell's hyperequatorial climate Into a kind of a sulphureous yellow: A lean mark, hardly fit to fling a rhyme at; In shape a Scaramouch, in hue Othello. _45 If you unveil my Witch, no priest nor primate Can shrive you of that sin,—if sin there be In love, when it becomes idolatry.

THE WITCH OF ATLAS.

1. Before those cruel Twins, whom at one birth Incestuous Change bore to her father Time, _50 Error and Truth, had hunted from the Earth All those bright natures which adorned its prime, And left us nothing to believe in, worth The pains of putting into learned rhyme, A lady-witch there lived on Atlas' mountain _55 Within a cavern, by a secret fountain.

2. Her mother was one of the Atlantides: The all-beholding Sun had ne'er beholden In his wide voyage o'er continents and seas So fair a creature, as she lay enfolden _60 In the warm shadow of her loveliness;— He kissed her with his beams, and made all golden The chamber of gray rock in which she lay— She, in that dream of joy, dissolved away.

3. 'Tis said, she first was changed into a vapour, _65 And then into a cloud, such clouds as flit, Like splendour-winged moths about a taper, Round the red west when the sun dies in it: And then into a meteor, such as caper On hill-tops when the moon is in a fit: _70 Then, into one of those mysterious stars Which hide themselves between the Earth and Mars....