The Witch-cult in Western Europe A Study in Anthropology 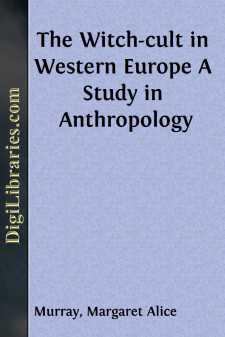 The subject of Witches and Witchcraft has always suffered from the biassed opinions of the commentators, both contemporary and of later date. On the one hand are the writers who, having heard the evidence at first hand, believe implicitly in the facts and place upon them the unwarranted construction that those facts were due to supernatural power; on the other hand are the writers who, taking the evidence on hearsay and disbelieving the conclusions drawn by their opponents, deny the facts in toto. Both parties believed with equal firmness in a personal Devil, and both supported their arguments with quotations from the Bible. But as the believers were able to bring forward more texts than the unbelievers and had in their hands an unanswerable argument in the Witch of Endor, the unbelievers, who dared not contradict the Word of God, were forced to fall back on the theory that the witches suffered from hallucination, hysteria, and, to use the modern word, 'auto-suggestion'. These two classes still persist, the sceptic predominating. Between the believer who believed everything and the unbeliever who disbelieved everything there has been no critical examination of the evidence, which presents a new and untouched field of research to the student of comparative religion.

Among the believers in witchcraft everything which could not be explained by the knowledge at their disposal was laid to the credit of supernatural powers; and as everything incomprehensible is usually supposed to emanate from evil, the witches were believed to be possessed of devilish arts. As also every non-Christian God was, in the eyes of the Christian, the opponent of the Christian God, the witches were considered to worship the Enemy of Salvation, in other words, the Devil. The greater number of these writers, however, obtained the evidence at first hand, and it must therefore be accepted although the statements do not bear the construction put upon them. It is only by a careful comparison with the evidence of anthropology that the facts fall into their proper places and an organized religion stands revealed.

The common beliefs as to the powers of the witches are largely due to the credulous contemporary commentators, who misunderstood the evidence and then exaggerated some of the facts to suit their preconceived ideas of the supernatural powers of the witches; thereby laying themselves open to the ridicule of all their opponents, past and present. Yet the ridicule is not fully deserved, for the facts are there, though the explanation is wrong; for even the two points, which are usually considered the ultimate proof of the absurdity and incredibility of the whole system—the flying on a broomstick through the window or up the chimney, and the transformation into animals—are capable of explanation. The first can be accounted for when the form of early mound-dwellings is taken into consideration, and when it is remembered that among savage tribes there are often taboos connected with the door, the two-faced god being essentially a deity of the door....