The Witch and other stories 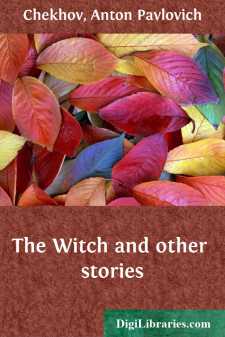 IT was approaching nightfall. The sexton, Savely Gykin, was lying in his huge bed in the hut adjoining the church. He was not asleep, though it was his habit to go to sleep at the same time as the hens. His coarse red hair peeped from under one end of the greasy patchwork quilt, made up of coloured rags, while his big unwashed feet stuck out from the other. He was listening. His hut adjoined the wall that encircled the church and the solitary window in it looked out upon the open country. And out there a regular battle was going on. It was hard to say who was being wiped off the face of the earth, and for the sake of whose destruction nature was being churned up into such a ferment; but, judging from the unceasing malignant roar, someone was getting it very hot. A victorious force was in full chase over the fields, storming in the forest and on the church roof, battering spitefully with its fists upon the windows, raging and tearing, while something vanquished was howling and wailing.... A plaintive lament sobbed at the window, on the roof, or in the stove. It sounded not like a call for help, but like a cry of misery, a consciousness that it was too late, that there was no salvation. The snowdrifts were covered with a thin coating of ice; tears quivered on them and on the trees; a dark slush of mud and melting snow flowed along the roads and paths. In short, it was thawing, but through the dark night the heavens failed to see it, and flung flakes of fresh snow upon the melting earth at a terrific rate. And the wind staggered like a drunkard. It would not let the snow settle on the ground, and whirled it round in the darkness at random.

Savely listened to all this din and frowned. The fact was that he knew, or at any rate suspected, what all this racket outside the window was tending to and whose handiwork it was.

"I know!" he muttered, shaking his finger menacingly under the bedclothes; "I know all about it."

On a stool by the window sat the sexton's wife, Raissa Nilovna. A tin lamp standing on another stool, as though timid and distrustful of its powers, shed a dim and flickering light on her broad shoulders, on the handsome, tempting-looking contours of her person, and on her thick plait, which reached to the floor. She was making sacks out of coarse hempen stuff. Her hands moved nimbly, while her whole body, her eyes, her eyebrows, her full lips, her white neck were as still as though they were asleep, absorbed in the monotonous, mechanical toil. Only from time to time she raised her head to rest her weary neck, glanced for a moment towards the window, beyond which the snowstorm was raging, and bent again over her sacking. No desire, no joy, no grief, nothing was expressed by her handsome face with its turned-up nose and its dimples. So a beautiful fountain expresses nothing when it is not playing.

But at last she had finished a sack. She flung it aside, and, stretching luxuriously, rested her motionless, lack-lustre eyes on the window. The panes were swimming with drops like tears, and white with short-lived snowflakes which fell on the window, glanced at Raissa, and melted.......