The Wit and Humor of America, Volume X (of X) 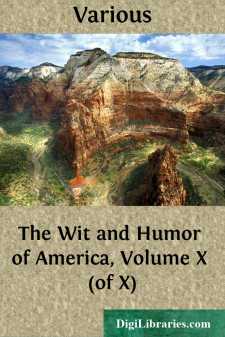 My pa—he always went to school,He says, an' studied hard.W'y, when he's just as big as meHe knew things by the yard!Arithmetic? He knew it allFrom dividend to sum;But when he tells me how it was,My grandma, she says "Hum!"My pa—he always got the prizeFor never bein' late;An' when they studied joggerfyHe knew 'bout every state.He says he knew the rivers, an'Knew all their outs an' ins;But when he tells me all o' that,My grandma, she just grins.My pa, he never missed a dayA-goin' to the school,An' never played no hookey, norForgot the teacher's rule;An' every class he's ever in,The rest he always led.My grandma, when pa talks that way,Just laughs an' shakes her head.My grandma says 'at boys is boys,The same as pas is pas,An' when I ast her what she meansShe says it is "because."She says 'at little boys is bestWhen they grows up to men,Because they know how good they was,An' tell their children, then!

Never spare the parson's wine, nor the baker's pudding.

A house without woman or firelight is like a body without soul or spirit.

He's a fool that makes his doctor his heir.

Ne'er take a wife till thou hast a house (and a fire) to put her in.

To lengthen thy life, lessen thy meals.

He that drinks fast pays slow.

He is ill-clothed who is bare of virtue.

Beware of meat twice boil'd, and an old foe reconcil'd.

The heart of a fool is in his mouth, but the mouth of a wise man is in his heart.

He that waits upon fortune is never sure of a dinner.

I feel very much as if I had just awakened out of a long sleep. I attribute it to the fact that I have slept the greater part of the time for the last two days and nights. On Wednesday, I sat up all night, in Virginia, in order to be up early enough to take the five o'clock stage on Thursday morning. I was on time. It was a great success. I had a cheerful trip down to Carson, in company with that incessant talker, Joseph T. Goodman. I never saw him flooded with such a flow of spirits before. He restrained his conversation, though, until we had traveled three or four miles, and were just crossing the divide between Silver City and Spring Valley, when he thrust his head out of the dark stage, and allowed a pallid light from the coach lamps to illuminate his features for a moment, after which he returned to darkness again, and sighed and said, "Damn it!" with some asperity....