The Wit and Humor of America, Volume VIII (of X) 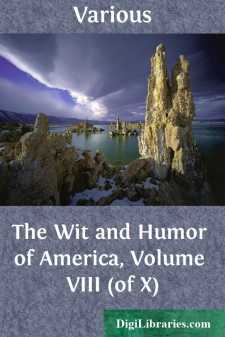 In the warm sun of the southern morning the great plantation lay as though half-asleep, dozing and blinking at the advancing day. The plantation house, known in all the country side as the Big House, rested calm and self-confident in the middle of a wide sweep of cleared lands, surrounded immediately by dark evergreens and the occasional primeval oaks spared in the original felling of the forest. Wide and rambling galleries of one height or another crawled partially about the expanses of the building, and again paused, as though weary of the attempt to circumvent it. The strong white pillars, rising from the ground floor straight to the third story, shone white and stately, after the old Southern fashion, that Grecian style, simplified and made suitable to provincial purses by those Adams brothers of old England who first set the fashion in early American architecture. White-coated, with wide, cool, green blinds, with ample and wide-doored halls, and deep, low windows, the Big House, here in the heart of the warm southland, was above all things suited to its environment. It was all so safe and sure that there was no need for anxiety. Life here was as it had been for generations, even for the generation following the upheaval of the Civil War.

But if this were a kingdom apart and self-sufficient, what meant this thing which crossed the head of the plantation—this double line, tenacious and continuous, which shone upon the one hand dark, and upon the other, where the sun touched it, a cold gray in color? What meant this squat little building at the side of these rails which reached on out straight as the flight of a bird across the clearing and vanished keenly in the forest wall? This was the road of the iron rails. It clung close to the ground, at times almost sinking into the embankment now grown scarcely discernible among the concealing grass and weeds, although the track itself had been built but recently. This railroad sought to efface itself, even as the land sought to aid in its effacement, as though neither believed that this was lawful spot for it. One might say it made a blot upon this picture of the morning.

Perhaps it seemed thus to the tall young girl who now stood upon its long gallery, her tangle of high-rolled, red-brown hair held back by the hand which half shaded her eyes as she looked out discontentedly over the familiar scene. Miss Lady—for thus she was christened by the Big House servants; and she bore well the title—frowned now as she tapped a little foot upon the gallery floor. Perhaps it was not so much what she saw as what she did not see that made Miss Lady discontented, for this white rim of the forest bounded the world for her; yet after all, youth and the morning do not conspire with discontent. A moment more, light, fleet of foot, Miss Lady fled down the gallery steps, through the gate and out along the garden walk. Beyond the yard fence she was greeted riotously by a score of dogs and puppies, long since her friends and devoted admirers; as, indeed, were all dwellers, dumb or human, thereabout.

Had Miss Lady, or any observer, looked from the gallery off to the southward and down the railway track, there might thus have been discovered two figures just emerging from the rim of the forest something like a mile away; and these might have been seen growing slowly more distinct, as they plodded up the railway track toward the Big House. Presently they might have been discovered to be a man and a woman; the former tall, thin, dark and stooped; his companion, tall as himself, quite as thin, and almost as bent. The garb of the man was nondescript, neutral, loose; his hat dark and flapping. The woman wore a shapeless calico gown, and on her head was a long, telescopic sunbonnet of faded pink, from which she must perforce peer forward, looking neither to the right nor to the left.

The travelers, indeed, needed not to look to the right or the left, for the path of the iron rails led them directly on. They did not step to the gallery, did not knock at the door, or, indeed, give any evidences of their intentions, but seated themselves deliberately upon a pile of boards that lay near in the broad expanse of the front yard. Here they remained, silent and at rest, fitting well enough into the sleepy scene....