The Wit and Humor of America, Volume VI. (of X.) 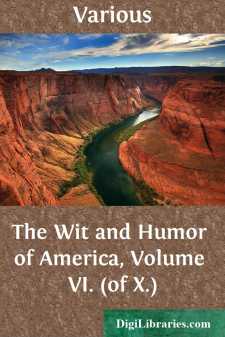 GRAINS OF TRUTH BY BILL NYE

A young friend has written to me as follows: "Could you tell me something of the location of the porcelain works in Sèvres, France, and what the process is of making those beautiful things which come from there? How is the name of the town pronounced? Can you tell me anything of the history of Mme. Pompadour? Who was the Dauphin? Did you learn anything of Louis XV whilst in France? What are your literary habits?"

It is with a great, bounding joy that I impart the desired information. Sèvres is a small village just outside of St. Cloud (pronounced San Cloo). It is given up to the manufacture of porcelain. You go to St. Cloud by rail or river, and then drive over to Sèvres by diligence or voiture. Some go one way and some go the other. I rode up on the Seine, aboard of a little, noiseless, low-pressure steamer about the size of a sewing machine. It was called the Silvoo Play, I think.

The fare was thirty centimes—or, say, three cents. After paying my fare and finding that I still had money left, I lunched at St. Cloud in the open air at a trifling expense. I then took a bottle of milk from my pocket and quenched my thirst. Traveling through France one finds that the water is especially bad, tasting of the Dauphin at times, and dangerous in the extreme. I advise those, therefore, who wish to be well whilst doing the Continent, to carry, especially in France, as I did, a large, thick-set bottle of milk, or kumiss, with which to take the wire edge off one's whistle whilst being yanked through the Louvre.

St. Cloud is seven miles west of the center of Paris and almost ten miles by rail on the road to Versailles—pronounced Vairsi. St. Cloud belongs to the canton of Sèvres and the arrondissement of Versailles. An arrondissement is not anything reprehensible. It is all right. You, yourself, could belong to an arrondissement if you lived in France.

St. Cloud is on the beautiful hill slope, looking down the valley of the Seine, with Paris in the distance. It is peaceful and quiet and beautiful. Everything is peaceful in Paris when there is no revolution on the carpet. The steam cars run safely and do not make so much noise as ours do. The steam whistle does not have such a hold on people as it does here. The adjutant-general at the depot blows a little tin bugle, the admiral of the train returns the salute, the adjutant-general says "Allons!" and the train starts off like a somewhat leisurely young man who is going to the depot to meet his wife's mother.

One does not realize what a Fourth of July racket we live in and employ in our business till he has been the guest of a monarchy of Europe, between whose toes the timothy and clover have sprung up to a great height. And yet it is a pleasing change, and I shall be glad when we as a republic have passed the blow-hard period, laid aside the ear-splitting steam whistle, settled down to good, permanent institutions, and taken on the restful, soothful, Boston air which comes with time and the quiet self-congratulation that one is born in a Bible land and with Gospel privileges, and where the right to worship in a strictly high-church manner is open to all.