The Wit and Humor of America, Volume IX (of X) 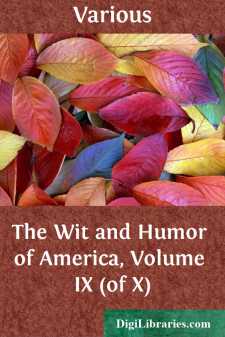 They all climbed up on a high board-fence—Nine little Goblins, with green-glass eyes—Nine little Goblins that had no sense,And couldn't tell coppers from cold mince pies;And they all climbed up on the fence, and sat—And I asked them what they were staring at.And the first one said, as he scratched his headWith a queer little arm that reached out of his earAnd rasped its claws in his hair so red—"This is what this little arm is fer!"And he scratched and stared, and the next one said"How on earth do you scratch your head?"And he laughed like the screech of a rusty hinge—Laughed and laughed till his face grew black;And when he choked, with a final twingeOf his stifling laughter, he thumped his backWith a fist that grew on the end of his tailTill the breath came back to his lips so pale.And the third little Goblin leered round at me—And there were no lids on his eyes at all—And he clucked one eye, and he says, says he,"What is the style of your socks this fall?"And he clapped his heels—and I sighed to seeThat he had hands where his feet should be.Then a bald-faced Goblin, gray and grim,Bowed his head, and I saw him slipHis eyebrows off, as I looked at him,And paste them over his upper lip;And then he moaned in remorseful pain—"Would—Ah, would I'd me brows again!"And then the whole of the Goblin bandRocked on the fence-top to and fro,And clung, in a long row, hand in hand,Singing the songs that they used to know—Singing the songs that their grandsires sungIn the goo-goo days of the Goblin-tongue.And ever they kept their green-glass eyesFixed on me with a stony stare—Till my own grew glazed with a dread surmise,And my hat whooped up on my lifted hair,And I felt the heart in my breast snap toAs you've heard the lid of a snuff-box do.And they sang, "You're asleep! There is no board-fence,And never a Goblin with green-glass eyes!—'Tis only a vision the mind inventsAfter a supper of cold mince-pies,—And you're doomed to dream this way," they said,—"And you sha'n't wake up till you're clean plum dead!"

It was natural that it should be quiet for Mrs. Cairnes in her empty house. Once there had been such a family of brothers and sisters there! But one by one they had married, or died, and at any rate had drifted out of the house, so that she was quite alone with her work, and her memories, and the echoes in her vacant rooms. She hadn't a great deal of work; her memories were not pleasant; and the echoes were no pleasanter. Her house was as comfortable otherwise as one could wish; in the very centre of the village it was, too, so that no one could go to church, or to shop, or to call, unless Mrs. Cairnes was aware of the fact, if she chose; and the only thing that protected the neighbors from this supervision was Mrs. Cairnes's mortal dread of the sun on her carpet; for the sun lay in that bay-windowed corner nearly all the day, and even though she filled the window full of geraniums and vines and calla-lilies she could not quite shut it out, till she resorted to sweeping inner curtains....