The Wit and Humor of America, Volume IV. (of X.) 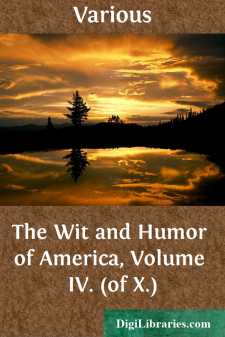 THE STORY OF THE TWO FRIARS BY EUGENE FIELD

It befell in the year 1662, in which same year were many witchcrafts and sorceries, such as never before had been seen and the like of which will never again, by grace of Heaven, afflict mankind—in this year it befell that the devil came upon earth to tempt an holy friar, named Friar Gonsol, being strictly minded to win that righteous vessel of piety unto his evil pleasance.

Now wit you well that this friar had grievously offended the devil, for of all men then on earth there was none more holier than he nor none surer to speak and to do sweet charity unto all his fellows in every place. Therefore it was that the devil was sore wroth at the Friar Gonsol, being mightily plagued not only by his teachings and his preachings, but also by the pious works which he continually did do. Right truly the devil knew that by no common temptations was this friar to be moved, for the which reason did the devil seek in dark and troublous cogitations to bethink him of some new instrument wherewith he might bedazzle the eyes and ensnare the understanding of the holy man. On a sudden it came unto the fiend that by no corporeal allurement would he be able to achieve his miserable end, for that by reason of an abstemious life and a frugal diet the Friar Gonsol had weaned his body from those frailties and lusts to which human flesh is by nature of the old Adam within it disposed, and by long-continued vigils and by earnest devotion and by godly contemplations and by divers proper studies had fixed his mind and his soul with exceeding steadfastness upon things unto his eternal spiritual welfare appertaining. Therefore it beliked the devil to devise and to compound a certain little booke of mighty curious craft, wherewith he might be like to please the Friar Gonsol and, in the end, to ensnare him in his impious toils. Now this was the way of the devil's thinking, to wit: This friar shall suspect no evil in the booke, since never before hath the devil tempted mankind with such an instrument, the common things wherewith the devil tempteth man being (as all histories show and all theologies teach) fruit and women and other like things pleasing to the gross and perishable senses. Therefore, argueth the devil, when I shall tempt this friar with a booke he shall be taken off his guard and shall not know it to be a temptation. And thereat was the devil exceeding merry and he did laugh full merrily.

Now presently came this thing of evil unto the friar in the guise of another friar and made a proper low obeisance unto the same. But the Friar Gonsol was not blinded to the craft of the devil, for from under the cloak and hood that he wore there did issue the smell of sulphur and of brimstone which alone the devil hath.

"Beshrew me," quoth the Friar Gonsol, "if the odour in my nostrils be spikenard and not the fumes of the bottomless pit!"

"Nay, sweet friar," spake the devil full courteously, "the fragrance thou perceivest is of frankincense and myrrh, for I am of holy orders and I have brought thee a righteous booke, delectable to look upon and profitable unto the reading."

Then were the eyes of that Friar Gonsol full of bright sparklings and his heart rejoiced with exceeding joy, for he did set most store, next to his spiritual welfare, by bookes wherein was food to his beneficial devouring.

"I do require thee," quoth the friar, "to shew me that booke that I may know the name thereof and discover whereof it treateth."

Then shewed the devil the booke unto the friar, and the friar saw it was an uncut unique of incalculable value; the height of it was half a cubit and the breadth of it the fourth part of a cubit and the thickness of it five barleycorns lacking the space of three horsehairs. This booke contained, within its divers picturings, symbols and similitudes wrought with incomparable craft, the same being such as in human vanity are called proof before letters, and imprinted upon India paper; also the booke contained written upon its pages, divers names of them that had possessed it, all these having in their time been mighty and illustrious personages; but what seemed most delectable unto the friar was an autographic writing wherein 'twas shewn that the booke sometime had been given by Venus di Medici to Apollos at Rhodes.

When therefore the Friar Gonsol saw the booke how that it was intituled and imprinted and adorned and bounden, he knew it to be of vast worth and he was mightily moved to possess it; therefore he required of the other (that was the devil) that he give unto him an option upon the same for the space of seven days hence or until such a time as he could inquire concerning the booke in Lowndes and other such like authorities....