The Wit and Humor of America, Volume III. (of X.) 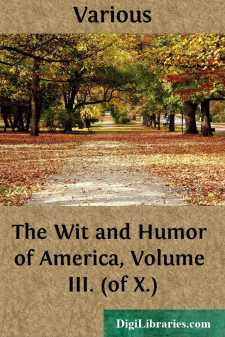 OUR NEW NEIGHBORS AT PONKAPOG BY THOMAS BAILEY ALDRICH

When I saw the little house building, an eighth of a mile beyond my own, on the Old Bay Road, I wondered who were to be the tenants. The modest structure was set well back from the road, among the trees, as if the inmates were to care nothing whatever for a view of the stylish equipages which sweep by during the summer season. For my part, I like to see the passing, in town or country; but each has his own unaccountable taste. The proprietor, who seemed to be also the architect of the new house, superintended the various details of the work with an assiduity that gave me a high opinion of his intelligence and executive ability, and I congratulated myself on the prospect of having some very agreeable neighbors.

It was quite early in the spring, if I remember, when they moved into the cottage—a newly married couple, evidently: the wife very young, pretty, and with the air of a lady; the husband somewhat older, but still in the first flush of manhood. It was understood in the village that they came from Baltimore; but no one knew them personally, and they brought no letters of introduction. (For obvious reasons, I refrain from mentioning names.) It was clear that, for the present at least, their own company was entirely sufficient for them. They made no advance toward the acquaintance of any of the families in the neighborhood, and consequently were left to themselves. That, apparently, was what they desired, and why they came to Ponkapog. For after its black bass and wild duck and teal, solitude is the chief staple of Ponkapog. Perhaps its perfect rural loveliness should be included. Lying high up under the wing of the Blue Hills, and in the odorous breath of pines and cedars, it chances to be the most enchanting bit of unlaced disheveled country within fifty miles of Boston, which, moreover, can be reached in half an hour's ride by railway. But the nearest railway station (Heaven be praised!) is two miles distant, and the seclusion is without a flaw. Ponkapog has one mail a day; two mails a day would render the place uninhabitable.

The village—it looks like a compact village at a distance, but unravels and disappears the moment you drive into it—has quite a large floating population. I do not allude to the perch and pickerel in Ponkapog Pond. Along the Old Bay Road, a highway even in the Colonial days, there are a number of attractive villas and cottages straggling off toward Milton, which are occupied for the summer by people from the city. These birds of passage are a distinct class from the permanent inhabitants, and the two seldom closely assimilate unless there has been some previous connection. It seemed to me that our new neighbors were to come under the head of permanent inhabitants; they had built their own house, and had the air of intending to live in it all the year round.

"Are you not going to call on them?" I asked my wife one morning.

"When they call on us," she replied lightly.

"But it is our place to call first, they being strangers."

This was said as seriously as the circumstance demanded; but my wife turned it off with a laugh, and I said no more, always trusting to her intuitions in these matters....