The Wit and Humor of America, Volume II. (of X.) 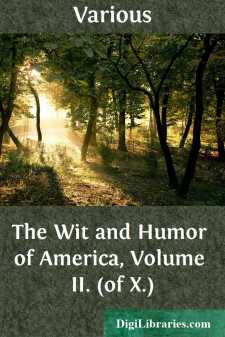 Once on a Time, there were Two Men, each of whom decided to build for himself a Fine, New House.

One Man, being of an Arrogant and Conceited Nature, took counsel of Nobody, but declared that he would build his House to suit himself.

"For," said he, "since it is My House and I am to Live in It, why should I ask the Advice of my Neighbors as to its Construction?"

While the House was Building, the Neighbors came often and Looked at it, and went away, Whispering and Wagging their Heads in Derision.

But the Man paid no Heed, and continued to build his House as he Would.

The Result was that, when completed, his House was lacking in Symmetry and Utility, and in a Hundred ways it was Unsatisfactory, and for each Defect there was a Neighbor who said, "Had you asked Me, I would have Warned you against that Error."

The Other Man, who was of a Humble and Docile Mind, went to Each of his Neighbors in Turn, and asked Advice about the Building of his House.

His Friends willingly and at Great Length gave him the Benefit of their Experiences and Opinions, and the Grateful Man undertook to Follow Out all their Directions.

The Result was that his House, when finished, was a Hodge-Podge of Varying Styles and Contradictory Effects, and Exceedingly Uncomfortable and Inconvenient to Live In.

This Fable teaches that In a Multitude of Counselors there is Safety, and that Too Many Cooks Spoil the Broth.

YES? BY JOHN BOYLE O'REILLY The words of the lips are double or single,True or false, as we say or sing:But the words of the eyes that mix and mingleAre always saying the same old thing. FASCINATION BY JOHN B. TABB Among your many playmates here,How is it that you all preferYour little friend, my dear?"Because, mamma, tho' hard we try,Not one of us can spit so high,And catch it in his ear." BARNEY MCGEE BY RICHARD HOVEY Barney McGee, there's no end of good luck in you,Will-o'-the-wisp, with a flicker of Puck in you,Wild as a bull-pup, and all of his pluck in you—Let a man tread on your coat and he'll see!Eyes like the lakes of Killarney for clarity,Nose that turns up without any vulgarity,Smile like a cherub, and hair that is carroty—Whoop, you're a rarity, Barney McGee!Mellow as Tarragon,Prouder than Aragon—Hardly a paragon,You will agree—Here's all that's fine to you!Books and old wine to you!Girls be divine to you,Barney McGee! Lucky the day when I met you unwittingly,Dining where vagabonds came and went flittingly.Here's some Barbera to drink it befittingly,That day at Silvio's, Barney McGee!Many's the time we have quaffed our Chianti there,Listened to Silvio quoting us Dante there—Once more to drink Nebiolo spumante there,How we'd pitch Pommery into the sea!There where the gang of usMet ere Rome rang of us,They had the hang of usTo a degree.How they would trust to you!That was but just to you.Here's o'er their dust to you,Barney McGee! Barney McGee, when you're sober you scintillate,But when you're in drink you're the pride of the intellect;Divil a one of us ever came in till late,Once at the bar where you happened to be—Every eye there like a spoke in you centering,You with your eloquence, blarney, and bantering—All Vagabondia shouts at your entering,King of the Tenderloin, Barney McGee...!
Show more
Show less