The Wit and Humor of America, Volume I. (of X.) 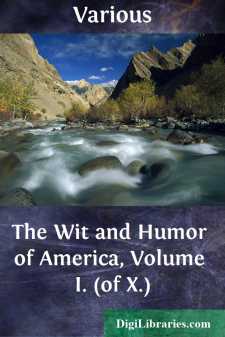 As I do not suppose the most gentle of readers will believe that anybody's sponsors in baptism ever wilfully assumed the responsibility of such a name, I may as well state that I have reason to infer that Melons was simply the nickname of a small boy I once knew. If he had any other, I never knew it.

Various theories were often projected by me to account for this strange cognomen. His head, which was covered with a transparent down, like that which clothes very small chickens, plainly permitting the scalp to show through, to an imaginative mind might have suggested that succulent vegetable. That his parents, recognizing some poetical significance in the fruits of the season, might have given this name to an August child, was an oriental explanation. That from his infancy, he was fond of indulging in melons, seemed on the whole the most likely, particularly as Fancy was not bred in McGinnis's Court. He dawned upon me as Melons. His proximity was indicated by shrill, youthful voices, as "Ah, Melons!" or playfully, "Hi, Melons!" or authoritatively, "You Melons!"

McGinnis's Court was a democratic expression of some obstinate and radical property-holder. Occupying a limited space between two fashionable thoroughfares, it refused to conform to circumstances, but sturdily paraded its unkempt glories, and frequently asserted itself in ungrammatical language. My window—a rear room on the ground floor—in this way derived blended light and shadow from the court. So low was the window-sill that, had I been the least disposed to somnambulism, it would have broken out under such favorable auspices, and I should have haunted McGinnis's Court. My speculations as to the origin of the court were not altogether gratuitous, for by means of this window I once saw the Past, as through a glass darkly. It was a Celtic shadow that early one morning obstructed my ancient lights. It seemed to belong to an individual with a pea-coat, a stubby pipe, and bristling beard. He was gazing intently at the court, resting on a heavy cane, somewhat in the way that heroes dramatically visit the scenes of their boyhood. As there was little of architectural beauty in the court, I came to the conclusion that it was McGinnis looking after his property. The fact that he carefully kicked a broken bottle out of the road somewhat strengthened me in the opinion. But he presently walked away, and the court knew him no more. He probably collected his rents by proxy—if he collected them at all.

Beyond Melons, of whom all this is purely introductory, there was little to interest the most sanguine and hopeful nature. In common with all such localities, a great deal of washing was done, in comparison with the visible results. There was always some thing whisking on the line, and always some thing whisking through the court, that looked as if it ought to be there. A fish-geranium—of all plants kept for the recreation of mankind, certainly the greatest illusion—straggled under the window....