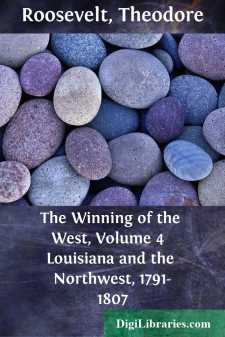 The Westward March of the Backwoodsman.

The backwoods folk, the stark hunters and tree-fellers, and the war-worn regulars who fought beside them in the forest, pushed ever westward the frontier of the Republic. Year after year each group of rough settlers and rough soldiers wrought its part in the great epic of wilderness conquest.

The people that for one or more generations finds its allotted task in the conquest of a continent, has before it the possibility of splendid victory, and the certainty of incredible toil, suffering, and hardship. The opportunity is great indeed; but the chance of disaster is even greater. Success is for a mighty race, in its vigorous and masterful prime. It is an opportunity such as is offered to an army by a struggle against a powerful foe; only by great effort can defeat be avoided, but triumph means lasting honor and renown.

As it is in the battle, so it is in the infinitely greater contests where the fields of fight are continents, and the ages form the measure of time. In actual life the victors win in spite of brutal blunders and repeated checks.

The Grimness and Harshness of Frontier Life.

Watched nearby, while the fight stamps to and fro, the doers and the deeds stand out naked and ugly. We see all too clearly the blood and sweat, the craft and dunning and blind luck, the raw cruelty and stupidity, the shortcomings of heart and hand, the mad abuse of victory. Strands of meanness and cowardice are everywhere shot through the warp of lofty and generous daring. There are failures bitter and shameful side by side with feats of triumphant prowess. Of those who venture in the contest some achieve success; others strive feebly and fail ignobly.

Only a Mighty Race Fit for the Trial.

If a race is weak, if it is lacking in the physical and moral traits which go to the makeup of a conquering people, it cannot succeed. For three hundred years the Portuguese possessed footholds in South Africa; but they left to the English and Dutch the task of building free communities able to hold in fact as well as in name the country south of the Zambesi. Temperate South America is as fertile and healthy for the white man as temperate North America, and is so much less in extent as to offer a far simpler problem of conquest and settlement; yet the Spaniard, who came to the Plata two centuries before the American backwoodsman reached the Mississippi, scarcely made as much progress in a decade as his northern rival did in a year.

The task must be given the race just at the time when it is ready for the undertaking. The whole future of the world would have been changed had the period of trans-oceanic expansion among the nations of Europe begun at a time when the Scandinavians or Germans were foremost in sea-trade and sea-war; if it had begun when the fleets of the Norsemen at the threatened all coasts, or when the Hanseatic league was in its prime.

No race can Succeed Save at the Right Moment.

But in the actual event the days of Scandinavian supremacy at sea resulted in no spread of the Scandinavian tongue or culture; and the temporary maritime prosperity of the North German cities bore no permanent fruit of conquest for the German people....