The Winning of the West, Volume 3 The Founding of the Trans-Alleghany Commonwealths, 1784-1790 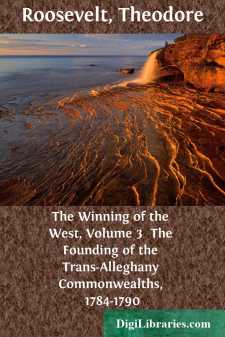 At the beginning of 1784 peace was a definite fact, and the United States had become one among the nations of the earth; a nation young and lusty in her youth, but as yet loosely knit, and formidable in promise rather than in actual capacity for performance.

On the western frontier lay vast and fertile vacant spaces; for the Americans had barely passed the threshold of the continent predestined to be the inheritance of their children and children's children. For generations the great feature in the nation's history, next only to the preservation of its national life, was to be its westward growth; and its distinguishing work was to be the settlement of the immense wilderness which stretched across to the Pacific. But before the land could be settled it had to be won.

The valley of the Ohio already belonged to the Americans by right of conquest and of armed possession; it was held by rifle-bearing backwoods farmers, hard and tenacious men, who never lightly yielded what once they had grasped. North and south of the valley lay warlike and powerful Indian confederacies, now at last thoroughly alarmed and angered by the white advance; while behind these warrior tribes, urging them to hostility, and furnishing them the weapons and means wherewith to fight, stood the representatives of two great European nations, both bitterly hostile to the new America, and both anxious to help in every way the red savages who strove to stem the tide of settlement. The close alliance between the soldiers and diplomatic agents of polished old-world powers and the wild and squalid warriors of the wilderness was an alliance against which the American settlers had always to make head in the course of their long march westward. The kings and the peoples of the old world ever showed themselves the inveterate enemies of their blood-kin in the new; they always strove to delay the time when their own race should rise to wellnigh universal supremacy. In mere blind selfishness, or in a spirit of jealousy still blinder, the Europeans refused to regard their kinsmen who had crossed the ocean to found new realms in new continents as entitled to what they had won by their own toil and hardihood. They persisted in treating the bold adventurers who went abroad as having done so simply for the benefit of the men who stayed at home; and they shaped their transatlantic policy in accordance with this idea. The Briton and the Spaniard opposed the American settler precisely as the Frenchman had done before them, in the interest of their own merchants and fur-traders. They endeavored in vain to bar him from the solitudes through which only the Indians roved.

All the ports around the Great Lakes were held by the British; [Footnote: State Dep. MSS., No. 150, vol. ii., March, 1788. Report of Secretary Knox.] their officers, military and civil, still kept possession, administering the government of the scattered French hamlets, and preserving their old-time relations with the Indian tribes, whom they continued to treat as allies or feudatories....