The Winning of the West, Volume 2 From the Alleghanies to the Mississippi, 1777-1783 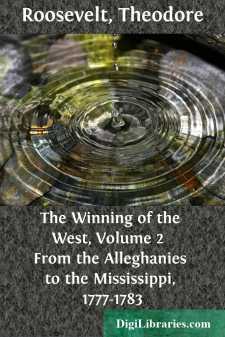 The Tribes Hold Councils at Detroit.

In the fall of 1776 it became evident that a formidable Indian war was impending. At Detroit great councils were held by all the northwestern tribes, to whom the Six Nations sent the white belt of peace, that they might cease their feuds and join against the Americans. The later councils were summoned by Henry Hamilton, the British lieutenant-governor of the northwestern region, whose head-quarters were at Detroit. He was an ambitious, energetic, unscrupulous man, of bold character, who wielded great influence over the Indians; and the conduct of the war in the west, as well as the entire management of frontier affairs, was intrusted to him by the British Government. [Footnote: Haldimand MSS. Sir Guy Carleton to Hamilton, September 26, 1777.] He had been ordered to enlist the Indians on the British side, and have them ready to act against the Americans in the spring; [Footnote: Do., Carleton to Hamilton, October 6, 1776.] and accordingly he gathered the tribes together. He himself took part in the war-talks, plying the Indians with presents and fire-water no less than with speeches and promises. The headmen of the different tribes, as they grew excited, passed one another black, red or bloody, and tomahawk belts, as tokens of the vengeance to be taken on their white foes. One Delaware chief still held out for neutrality, announcing that if he had to side with either set of combatants it would be with the "buckskins," or backwoodsmen, and not with the red-coats; but the bulk of the warriors sympathized with the Half King of the Wyandots when he said that the Long Knives had for years interfered with the Indians' hunting, and that now at last it was the Indians' turn to threaten revenge. [Footnote: "Am. Archives," 1st Series, Vol. II., p. 517. There were several councils held at Detroit during this fall, and it is difficult—and not very important—to separate the incidents that occurred at each. Some took place before Hamilton arrived, which, according to his "brief account," was November 9th. He asserts that he did not send out war parties until the following June; but the testimony seems conclusive that he was active in instigating hostility from the time of his arrival.]

Hamilton was for the next two years the mainspring of Indian hostility to the Americans in the northwest. From the beginning he had been anxious to employ the savages against the settlers, and when the home government bade him hire them he soon proved himself very expert, as well as very ruthless, in their use. [Footnote: Haldimand MSS. Germaine to Carlton, March 26, 1777.] He rapidly acquired the venomous hatred of the backwoodsmen, who held him in peculiar abhorrence, and nicknamed him the "hair-buyer" general, asserting that he put a price on the scalps of the Americans. This allegation may have been untrue as affecting Hamilton personally; he always endeavored to get the war parties to bring in prisoners, and behaved well to the captives when they were in his power; nor is there any direct evidence that he himself paid out money for scalps....