The Winning of the West, Volume 1 From the Alleghanies to the Mississippi, 1769-1776 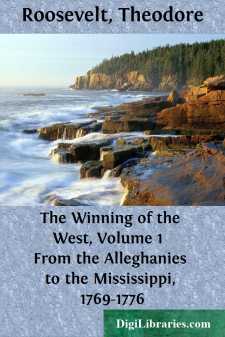 CHAPTER I. THE SPREAD OF THE ENGLISH-SPEAKING PEOPLES.

During the past three centuries the spread of the English-speaking peoples over the world's waste spaces has been not only the most striking feature in the world's history, but also the event of all others most far-reaching in its effects and its importance.

The tongue which Bacon feared to use in his writings, lest they should remain forever unknown to all but the inhabitants of a relatively unimportant insular kingdom, is now the speech of two continents. The Common Law which Coke jealously upheld in the southern half of a single European island, is now the law of the land throughout the vast regions of Australasia, and of America north of the Rio Grande. The names of the plays that Shakespeare wrote are household words in the mouths of mighty nations, whose wide domains were to him more unreal than the realm of Prester John. Over half the descendants of their fellow countrymen of that day now dwell in lands which, when these three Englishmen were born, held not a single white inhabitant; the race which, when they were in their prime, was hemmed in between the North and the Irish seas, to-day holds sway over worlds, whose endless coasts are washed by the waves of the three great oceans.

There have been many other races that at one time or another had their great periods of race expansion—as distinguished from mere conquest,—but there has never been another whose expansion has been either so broad or so rapid.

At one time, many centuries ago, it seemed as if the Germanic peoples, like their Celtic foes and neighbors, would be absorbed into the all-conquering Roman power, and, merging their identity in that of the victors, would accept their law, their speech, and their habits of thought. But this danger vanished forever on the day of the slaughter by the Teutoburger Wald, when the legions of Varus were broken by the rush of Hermann's wild warriors.

Two or three hundred years later the Germans, no longer on the defensive, themselves went forth from their marshy forests conquering and to conquer. For century after century they swarmed out of the dark woodland east of the Rhine, and north of the Danube; and as their force spent itself, the movement was taken up by their brethren who dwelt along the coasts of the Baltic and the North Atlantic. From the Volga to the Pillars of Hercules, from Sicily to Britain, every land in turn bowed to the warlike prowess of the stalwart sons of Odin. Rome and Novgorod, the imperial city of Italy as well as the squalid capital of Muscovy, acknowledged the sway of kings of Teutonic or Scandinavian blood.

In most cases, however, the victorious invaders merely intruded themselves among the original and far more numerous owners of the land, ruled over them, and were absorbed by them. This happened to both Teuton and Scandinavian; to the descendants of Alaric, as well as to the children of Rurik. The Dane in Ireland became a Celt; the Goth of the Iberian peninsula became a Spaniard; Frank and Norwegian alike were merged into the mass of Romance-speaking Gauls, who themselves finally grew to be called by the names of their masters....