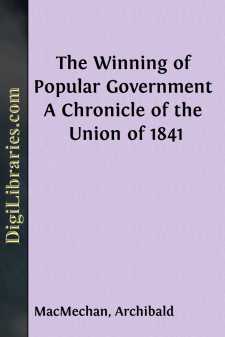 And let him be dictatorFor six months and no more.

The curious sightseer in modern Toronto, conducted through the well-kept, endless avenues of handsome dwellings which are that city's pride, might be surprised to learn that at the northern end of the street which cuts the city in two halves, east and west, bands of armed Canadians met in battle less than a century ago. If he continued his travels to Montreal, he might be told, at a certain point, 'Here stood the Parliament Buildings, when our city was the capital of the country; and here a governor-general of Canada was mobbed, pelted with rotten eggs and stones, and narrowly escaped with his life.' And if the intelligent traveller asked the reason for such scenes, where now all is peace, the answer might be given in one word—Politics.

To the young, politics seems rather a stupid sort of game played by the bald and obese middle-aged, for very high stakes, and governed by no rules that any player is bound to respect. Between the rival teams no difference is observable, save that one enjoys the sweets of office and the mouth of the other is watering for them. But this is, of course, the hasty judgment of uncharitable youth. The struggle between political parties in Canada arose in the past from a difference in political principles. It was a difference that could be defined; it could be put into plain words. On the one side and the other the guiding ideas could be formulated; they could be defended and they could be attacked in logical debate. Sometimes it might pass the wit of man to explain the difference between the Ins and the Outs. Sometimes politics may be a game; but often it has been a battle. In support of their political principles the strongest passions of men have been aroused, and their deepest convictions of right and wrong. The things by which men live, their religious creeds, their pride of race, have been enlisted on the one side and the other. This is true of Canadian politics.

That ominous date, 1837, marks a certain climax or culmination in the political development of Canada. The constitution of the country now works with so little friction that those who have not read history assume that it must always have worked so. There is a real danger in forgetting that, not so very long ago, the whole machinery of government in one province broke down, that for months, if not for years, it looked as if civil government in Lower Canada had come to an end, as if the colonial system of Britain had failed beyond all hope. Deus nobis haec otia fecit. But Canada's present tranquillity did not come about by miracle; it came about through the efforts of faulty men contending for political principles in which they believed and for which they were even ready to die. The rebellions of 1837 in Upper and Lower Canada, and what led up to them, the origins and causes of these rebellions, must be understood if the subsequent warfare of parties and the evolution of the scattered colonies of British North America into the compact united Dominion of Canada are not to be a confused and meaningless tale.[]

Futile and pitiful as were the rebellions, whether regarded as attempts to set up new government or as military adventures, they had widespread and most serious consequences within and without the country....