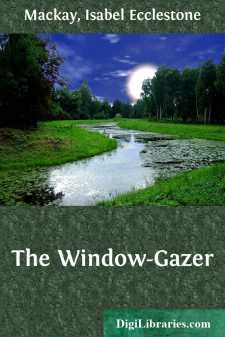 Professor Spence sat upon an upturned keg—and shivered. No one had told him that there might be fog and he had not happened to think of it for himself. Still, fog in a coast city at that time of the year was not an unreasonable happening and the professor was a reasonable man. It wasn't the fog he blamed so much as the swiftness of its arrival. Fifteen minutes ago the world had been an ordinary world. He had walked about in it freely, if somewhat irritably, following certain vague directions of the hotel clerk as to the finding of Johnston's wharf. He had found Johnston's wharf; extracted it neatly from a very wilderness of wharves, a feat upon which Mr. Johnston, making boats in a shed at the end of it, had complimented him highly.

"There's terrible few as finds me just off," said Mr. Johnston. "Hours it takes 'em sometimes, sometimes days." It was clear that he was restrained from adding "weeks" only by a natural modesty.

At the time, this emphasizing of the wharf's seclusion had seemed extravagant, but now the professor wasn't so sure. For the wharf had again mysteriously lost itself. And Mr. Johnston had lost himself, and the city and the streets of it, and the sea and its ships were all lost—there was nothing left anywhere save a keg (of nails) and Professor Benis Hamilton Spence sitting upon it. Around him was nothing but a living, pulsing whiteness, which pushed momentarily nearer.

It was interesting. But it was really very cold. The professor, who had suffered much from sciatica owing to an injury of the left leg, remembered that he had been told by his medical man never to allow himself to shiver; and here he was, shivering violently without so much as asking his own leave. And the fog crept closer. He put out his hands to push it back—and immediately his hands were lost too. "Really," murmured the professor, "this is most interesting!" Nevertheless, he reclaimed his hands and placed them firmly in his coat pockets.

He began to wish that he had stayed with Mr. Johnston in the boat shed, pending the arrival of the launch which, so certain letters in his pocket informed him, would leave Johnston's wharf at 5 o'clock, or there-abouts, Mondays and Fridays. Mr. Johnston had felt very uncertain about this. "Though she does happen along off and on," he said optimistically, "and she might come today. Not," he added with commendable caution, "that I'd call old Doc. Farr's boat a 'launch' myself."

"What," asked Professor Spence, "would you call her yourself?"

"Don't know as I can just hit on a name," said Mr. Johnston. "Doesn't come natural to me to be free with language."

It had been pleasant enough on the wharf at first and certainly it had been worth something to see the fog come in. Its incredible advance, wave upon wave of massed and silent whiteness, had held him spellbound. While he had thought it still far off, it was upon him—around him, behind him, everywhere!

But perhaps it would go as quickly as it had come.

He had heard that this is sometimes a characteristic of fog....