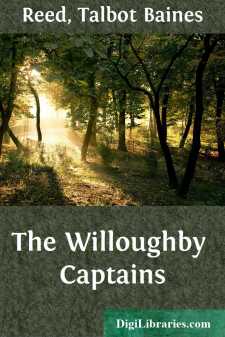 The last of the old Captain.

Something unusual is happening at Willoughby. The Union Jack floats proudly over the old ivy-covered tower of the school, the schoolrooms are deserted, there is a band playing somewhere, a double row of carriages is drawn up round the large meadow (familiarly called “The Big”), old Mrs Gallop, the orange and sherbert woman, is almost beside herself with business flurry, and boys are going hither and thither, some of them in white ducks with favours on their sleeves, and others in their Sunday “tiles,” with sisters and cousins and aunts in tow, whose presence adds greatly to the brightness of the scene.

Among these last-named holiday-making young Willoughbites no one parades more triumphantly to-day than Master Cusack, of Welch’s House, by the side of his father, Captain Cusack, R.N. Cusack, ever since he came to Willoughby, has bored friend and foe with endless references to “the gov., captain in the R.N., you know,” and now that he really has a chance of showing off his parent in the flesh his small head is nearly turned. He puffs along like a small steam-tug with a glorious man-of-war in tow, and is too anxious to exhibit his prize in “The Big” to do even the ordinary honours of the place to his relative.

Captain Cusack, R.N., the meekest and most amiable of men, resigns himself pleasantly to the will of his dutiful conductor, only too pleased to see the boy so happy, and pardonably gratified to know that he himself is the special object of that young gentleman’s jubilation. He had come down, hoping for a quiet hour or two to see his boy and inspect Willoughby, but he finds that, instead, he is to be inspected himself, and, though he wouldn’t thwart the lad for the world, he would just as soon have dropped in at Willoughby on a rather less public occasion.

Young Cusack, as is the manner of small tugs, assumes complete control of his parent and rattles away incessantly as he conducts him through the grounds, past the school, towards the all-attracting “Big.”

“Who is Paddy?” inquires the father.

“And what’s written up over the door there?” inquires Captain Cusack, pointing up to the coat-of-arms above the great doorway.

“What are the open hurdles?” mildly inquires the somewhat perplexed captain, who has been at sea so long that he is really not up to all the modern phrases.

“Why, you know, it’s the sports, and there are two open events, the hurdles and the mile, and we’ve got Rawson, of the London Athletic, down against us in both; but I rather back Wyndham....