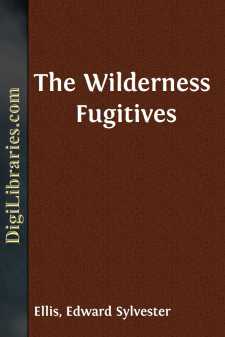 CHAPTER I. ALONE AND TOGETHER.

The reader will recall that at the close of The River Fugitives the narrative left our friends in a situation, apparently, of safety; and the belief, on the part of Jo Minturn, his sister Rosa and Ned Clinton, was strong that, in their flight from the dreadful scenes of the Wyoming massacre of July, 1778, they had left all dangers behind. They were confident that, under the guidance of the matchless Mohawk, Lena-Wingo (temporarily absent in quest of food), the road to security was beset by no perils worth the mention.

But, as has also been intimated, they were altogether wrong in this belief. Brother and sister and Ned Clinton were seated near each other on a fallen tree, and it was not yet fully dark when the soft tread of a moccasin was heard on the leaves, and they saw the tall, slim figure of the Mohawk come forth like some spirit of the forest to ask them their business in thus invading his domains. The supposition was so general that he had gone in quest of food, that a common instinct led them to look to see whether he brought anything of that nature with him. There was enough light left to show that he carried nothing but his gun.

"Well, Jack," said Ned, "we thought you had gone out foraging, but if you did, you didn't make much success of it."

"Well, did he find it?" asked Rosa, who was more daring in her questions than the others thought it prudent to be.

"Why don't you bring him here, then, that we may see him?"

"He gone," was the direct but rather unsatisfactory answer, for there was no telling to what he referred.

Rosa was on the point of questioning him further, when it struck her that if he desired them to know what he had been doing he would tell them only when he chose. And so she forbore.

"I hope the result was pleasing to you," ventured Ned Clinton, on what seemed forbidden ground.

"When Lena-Wingo look for Iroquois in canoe, he take knife along."

As this remark was clearly intended in the light of a joke, all felt the duty of laughing at it, although the mirthful inclination was not very tremendous, coming from such a grim source.

"Jo," added the redskin, after waiting for the applause to wear itself out, "want to see you."

The young man thus appealed to sprang to his feet, and placed himself beside the red scout, wondering what he could have to say that he should keep from the rest. Ned and Rosa saw them talking together for a minute or two, when they turned, as if to walk deeper into the woods. At that moment, Jo looked around and called to them in a cautious voice, just loud enough to be heard:

This was a curious proceeding, indeed; but there was no use of protesting against it. The Mohawk had a way of doing as he pleased about such matters, and it was useless to interfere. When they had been gone several minutes, it struck Ned that, as they would not be back for awhile, he was given a chance to converse with Rosa, such as had not been his since the invasion of the Wyoming valley.

The consciousness came upon him so suddenly that he was not a little confused by the problem of how he was to improve the opportunity. True, he had spent many hours in the company of the beautiful girl, but it seemed to him that never had he felt as he did then. He was sure that she must be aware of the unutterably tender affection he held toward her—a feeling that had grown within the last few days, until it took possession of his being. Not until the life of Rosa Minturn was placed in peril did he comprehend how much he loved her. When there was reason to fear she was in the hands of the Iroquois or the Tory colonel, and that he might never see her more, then it was that it seemed his heart must break from grief alone. And when, a short time after, she was found without a hair of her head injured, his joy was correspondingly great—so great, indeed, that he was sure all noticed it, even Rosa herself....