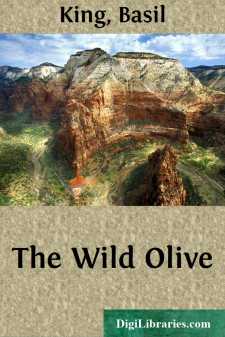 Finding himself in the level wood-road, whose open aisle drew a long, straight streak across the sky, still luminous with the late-lingering Adirondack twilight, the tall young fugitive, hatless, coatless, and barefooted, paused a minute for reflection. As he paused, he listened; but all distinctiveness of sound was lost in the play of the wind, up hill and down dale, through chasm and over crag, in those uncounted leagues of forest. It was only a summer wind, soft and from the south; but its murmur had the sweep of the eternal breath, while, when it waxed in power, it rose like the swell of some great cosmic organ. Through the pines and in the underbrush it whispered and crackled and crashed, with a variety of effect strangely bewildering to the young man's city-nurtured senses. There were minutes when he felt that not only the four country constables whom he had escaped were about to burst upon him, but that weird armies of gnomes were ready to trample him down.

Out of the confusion of wood-noises, in which his unpractised ear could distinguish nothing, he waited for a repetition of the shots which a few hours ago had been the protest of his guards; but, none coming, he sped on again. He weighed the danger of running in the open against the opportunities for speed, and decided in favor of the latter. Hitherto, in accordance with a woodcraft invented to meet the emergency, and entirely his own, he had avoided anything in the nature of a road or a pathway, in order to take advantage of the tracklessness which formed his obvious protection; but now he judged the moment come for putting actual space between his pursuers and himself. How near, or how far behind him, they might be he could not guess. If he had covered ground, they would have covered it too, since they were men born to the mountains, while he had been bred in towns. His hope lay in the possibility that in this wilderness he might be lost to their ken, as a mote is lost in the air—though he built something on the chance that, in sympathy with the feeling in his favor pervading the simpler population of the region, they had given negative connivance to his escape. These thoughts, far from stimulating a false confidence, urged him to greater speed.

And yet, even as he fled, he had a consciousness of abandoning something—perhaps of deserting something—which brought a strain of regret into this minute of desperate excitement. Without having had time to count the cost or reckon the result, he felt he was giving up the fight. He, or his counsel for him, had contested the ground with all the resourceful ingenuity known to the American legal practitioner. He was told that, in spite of the seeming finality of what had happened that morning, there were still loopholes through which the defence might be carried on. In the space of a few hours Fate had offered him the choice between two courses, neither of them fertile in promises of success. The one was long and tedious, with a possibility of ultimate justification; the other short and speedy, with the accepted imputation of guilt....