The Wild Huntress Love in the Wilderness 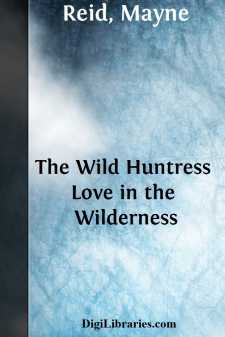 Chapter One. The Squatter’s Clearing.

The white-headed eagle, soaring above the spray of a Tennessean forest, looks down upon the clearing of the squatter. To the eye of the bird it is alone visible; and though but a spot in the midst of that immense green sea, it is conspicuous by the colour of the trees that stand over it. They stand, but grow not: the girdling ring around their stems has deprived them of their sap; the ivory bill of the log-cock has stripped them of their bark; their leaves and twigs have long since disappeared; and only the trunks and greater branches remain, like blanched skeletons, with arms upstretched to heaven, as if mutely appealing for vengeance against their destroyer.

The squatter’s clearing, still thus encumbered, is a mere vistal opening in the woods, from which only the underwood has been removed. The more slender saplings have been cut down or rooted up; the tangle of parasitical plants have been torn from the trees; the cane-brake has been fired; and the brush, collected in heaps, has melted away upon the blazing pile. Only a few stumps of inferior thickness give evidence, that some little labour has been performed by the axe.

Even thus the clearing is a mere patch—scarcely two acres in extent—and the rude rail-fence, that zig-zags around it, attests that the owner is satisfied with the dimensions of his agricultural domain. There are no recent marks of the axe—not even the “girdling” of a tree—nothing to show that another rood is required. The squatter is essentially a hunter; and hates the sight of an extensive clearing—as he would the labour of making one. The virgin forest is his domain, and he is not the man to rob it of its primeval charms. The sound of the lumberer’s axe, cheerful to the lonely traveller, has no music for his ear: it is to him a note of evil augury—a knell of dread import. It is not often that he hears it: he dwells beyond the circle of its echoes. His nearest neighbour—a squatter like himself—lives at least a mile off; and the most proximate “settlement” is six times that distance from the spot he has chosen for his cabin. The smoke of his chimney mingles with that of no other: its tall column ascends to heaven solitary as the squatter himself.

The clearing is of an irregular semi-circular shape—a deep narrow stream forming the chord, and afterwards cleaving its way through the otherwise unbroken forest. In the convexity of the arc, at that point most remote from the water, stands the cabin—a log “shanty” with “clapboard” roof—on one side flanked by a rude horse-shed, on the other by a corn-crib of split rails.

Such a picture is almost peculiar to the backwoods of America. Some may deem it commonplace. For my part, I cannot regard it in this light. I have never looked upon this primitive homestead of the pioneer without receiving from it an impression of romantic pleasure. Something seems to impart to it an air of vague and mystic grandeur. Perhaps I associate the picture with the frame in which it is set—the magnificent forest that surrounds it, every aisle of which is redolent of romance....