The White Riband Or, a Young Female's Folly 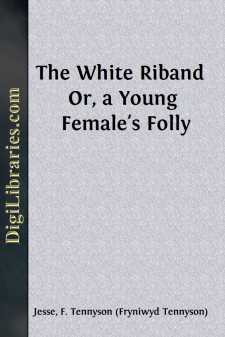 Chapter I IN WHICH THE READER IS TAKEN BACK A FEW WEEKS IN POINT OF TIME, AND DOWN SEVERAL STEPS IN THE SOCIAL SCALE

It was on a balmy day in early Spring that Loveday had first met Miss Le Pettit. Loveday had gone to fetch the milk. For Loveday's aunt, Senath Strick, with whom she lived, was a shiftless, unthrifty woman, never able to keep prosperous enough to own a cow for as long as the beast took between calvings, and the times when Loveday had a fragrant, soft-eyed animal to cherish were mercifully rare. Mercifully, for Loveday, though she appeared sullen, had ever more sensibility than was good for one in her position, and each time Aunt Senath was forced to sell the cow, Loveday behaved as though she had as good a right to sit and cry herself silly as any young lady with whom nothing was more urgent than to spoil fine cambric with salt water.

This, then, was a period of poverty with the Strick family, and Loveday was sent to fetch the evening milk from the farm at the crest of the hill. On the way, she came upon Cherry Cotton and Primrose Lear, seated upon a granite stile, their heads together over something Cherry held in her lap. Cherry heard approaching footsteps, and whipped her apron over the object she and her friend had been so busily discussing. Loveday was hurt rather than angered by the unkind action, for there was a reason, connected with Primrose, why she had felt a tender curiosity as to what the two girls were guarding so closely. Yet she was aware of bitterness also—for it was ever so when she appeared. Maids ceased their gossip, boys laughed and pointed after her. She was "different."

Not in being a love-child, there were plenty of them in the village, but their parents generally married later, and even if they did not, then the female partner in crime would be one of the unmentionable women about whom other people talk so much.... She would live by the harbour plying a trade which allowed her to have a love-child or so without it being an occasion for undue remark, or, if she did not descend to those depths where no one expects anything better and censure consequently ceases through ineffectiveness, then at least everyone knew the author of her fall to be an honest, loutish Englishman, no worse than most of his neighbours.

Loveday was without either of these two rights to existence. Her mother had been a respectable girl till her fall, and, as far as anyone was aware, since, for she had died of the fruit of her guilty connection, and though her portion was doubtless hell-fire, there is nothing to show that one cannot keep respectable even under such disquieting circumstances. The elder Loveday had clung obstinately to her self-respect under circumstances which her neighbours had tried to render nearly as trying on earth. She had died, as she had lived, impenitent and only crying for the foreigner who had seduced her, while he was then lying, had she but known it, in the lap of his first mistress, the sea, who, perhaps from jealousy at his straying, had taken him forcibly into her embrace on the same night that Loveday the younger was born....