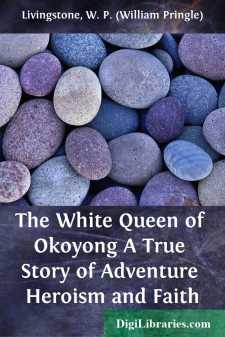 Tells how a little girl lived in a lowly home, and played, and dreamed dreams, and how a dark shadow came into her life and made her unhappy; how when she grew older she went into a factory and learned to weave, and how in her spare minutes she taught herself many things, and worked amongst wild boys; and how she was sent to Africa.

One cold day in December, in the city of Aberdeen, a baby girl was carried by her mother into a church to be enrolled in the Kingdom of Jesus and given a name. As the minister went through the tender and beautiful ceremony the people in the pews looked at the tiny form in her robes of white, and thought of the long years that lay before her and wondered what she would become, because every girl and boy is like a shut casket full of mystery and promise and hope. No one knows what gifts may lie hidden within them, and what great and surprising things they may do when they grow up and go out into the world.

The baby was christened "Mary Slessor," and then she was wrapped up carefully again and taken home. Surely no one present ever dreamed how much good little Mary would one day do for Africa.

It was not a very fine house into which Mary had been born, for her father, who was a shoemaker, did not earn much money; but her mother, a sweet and gentle woman, worked hard to keep it clean and tidy, and love makes even the poorest place sunshiny and warm. When Mary was able to run about she played a great deal with her brother Robert, who was older than she, but she liked to help her mother too: indeed she seemed to be fonder of doing things for others than for herself. She did not need dolls, for more babies came into the home, and she used to nurse them and dress them and hush them to sleep.

She was very good at make-believe, and one of her games was to sit in a corner and pretend that she was keeping school. If you had listened to her you would have found that the pupils she was busy teaching and keeping in order were children with skins as black as coal. The reason was this: Her mother took a great interest in all she heard on Sundays about the dark lands beyond the seas where millions of people had never heard of Jesus. The church to which she belonged, the United Presbyterian Church, had sent out many brave men and women to various parts of the world to fight the evils of heathenism, and a new Mission had just begun amongst a savage race in a wild country called Calabar in West Africa, and every one in Scotland was talking about it and the perils and hardships of the missionaries. Mrs. Slessor used to come home with all the news about the work, and the children would gather about her knees and listen to stories of the strange cruel customs of the natives, and how they killed the twin-babies, until their eyes grew big and round, and their hearts raced with fear, and they snuggled close to her side.

Mary was very sorry for these helpless bush-children, and often thought about them, and that was why she made them her play-scholars....