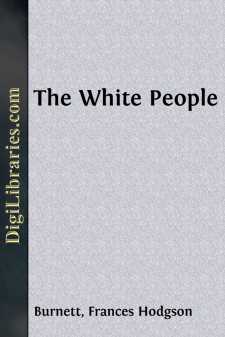 Perhaps the things which happened could only have happened to me. I do not know. I never heard of things like them happening to any one else. But I am not sorry they did happen. I am in secret deeply and strangely glad. I have heard other people say things—and they were not always sad people, either—which made me feel that if they knew what I know it would seem to them as though some awesome, heavy load they had always dragged about with them had fallen from their shoulders. To most people everything is so uncertain that if they could only see or hear and know something clear they would drop upon their knees and give thanks. That was what I felt myself before I found out so strangely, and I was only a girl. That is why I intend to write this down as well as I can. It will not be very well done, because I never was clever at all, and always found it difficult to talk.

I say that perhaps these things could only have happened to me, because, as I look back over my life, I realize that it has always been a rather curious one. Even when those who took care of me did not know I was thinking at all, I had begun to wonder if I were not different from other children. That was, of course, largely because Muircarrie Castle was in such a wild and remote part of Scotland that when my few relations felt they must pay me a visit as a mere matter of duty, their journey from London, or their pleasant places in the south of England, seemed to them like a pilgrimage to a sort of savage land; and when a conscientious one brought a child to play with me, the little civilized creature was as frightened of me as I was of it. My shyness and fear of its strangeness made us both dumb. No doubt I seemed like a new breed of inoffensive little barbarian, knowing no tongue but its own.

A certain clannish etiquette made it seem necessary that a relation should pay me a visit sometimes, because I was in a way important. The huge, frowning feudal castle standing upon its battlemented rock was mine; I was a great heiress, and I was, so to speak, the chieftainess of the clan. But I was a plain, undersized little child, and had no attraction for any one but Jean Braidfute, a distant cousin, who took care of me, and Angus Macayre, who took care of the library, and who was a distant relative also. They were both like me in the fact that they were not given to speech; but sometimes we talked to one another, and I knew they were fond of me, as I was fond of them. They were really all I had.

When I was a little girl I did not, of course, understand that I was an important person, and I could not have realized the significance of being an heiress. I had always lived in the castle, and was used to its hugeness, of which I only knew corners. Until I was seven years old, I think, I imagined all but very poor people lived in castles and were saluted by every one they passed. It seemed probable that all little girls had a piper who strode up and down the terrace and played on the bagpipes when guests were served in the dining-hall....