The White Christmas and other Merry Christmas Plays 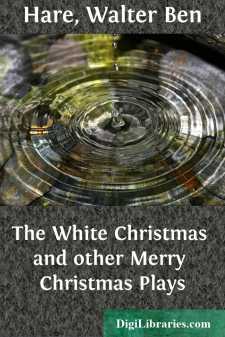 N these little plays I have tried to bring before the public the two dominant characteristics of the ideal Christmas season, kindness, expressed by "good will toward men," and the inward joy wrought by kind acts, and suggested by "peace on earth." As Yuletide draws near we like to think of the swell of Christmas feeling, kindness, peace and good will, that rises like a mighty tide over the world, filling it with the fresh, clean joys and generous impulses that produce the peace that passeth understanding.

Some of the plays are filled with the spirit of fun and jollity that is always associated with Christmas merrymaking; in others I have tried to emphasize the spiritual blessings brought to the children of men on that first white Christmas night when Christ, the Lord, was born in Bethlehem, and all the angels sang, "Gloria in excelsis, peace on earth, good will toward men."

The love of mimetic representation, either as a participant or as a spectator, is an ineradicable instinct of childhood and adolescence. Most of these plays call for a somewhat large number of children. This need not daunt the producer as the chief characters are few and many of the parts have very few lines to speak. Many extra children may be introduced in several of the plays, as a chorus. At Christmas time, the children's season, it is best to allow all who so desire to take part in the entertainment. Some of the parts are rather long, but all have been played by children of the age indicated in the text. Very little children have sometimes done remarkable work in the plays. I remember one instance when a very tiny Tiny Tim, who was not four years old, spoke his part correctly, was heard in every corner of the church and acted with a naturalness that was indeed remarkable.

First and foremost, do not over-rehearse your play. The chief charm in Christmas plays lies in their naturalness and simplicity, a part of which is almost sure to be lost if they have rehearsed the play until they have lost their wonder and excitement and enjoyment in the make-believe game of amateur theatricals.

The director's aim should be to establish a happy co-operation with the players that will make the whole production, rehearsals, dress rehearsals and final performance, a series of good times crowned by a happy, if not perfect, production. The director should always strive to be cheerful and happy, ever ready to give advice and ever ready to ask for advice, even from the youngest players. Take them into your confidence. Discuss color schemes, costuming, property making, lighting and scenic effects with your actors.

At the first rehearsal have the children listen to a reading of the play. Then read a short scene in detail, allowing each actor to read several parts. Try every child in every child's part before you make your final selection of the cast of characters. If it is possible, begin your second rehearsal on the stage where the play is to be given. Arrange chairs to represent entrances, doors, windows, etc., and have all properties on hand, in order to impress on the children's minds the necessity of learning the words and the action at the same time....