The Whence and the Whither of Man A Brief History of His Origin and Development through Conformity to Environment; Being the Morse Lectures of 1895 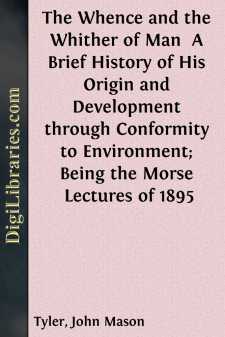 CHAPTER I THE PROBLEM: THE MODE OF ITS SOLUTION

The story of a human life can be told in very few words. A youth of golden dreams and visions; a few years of struggle or of neglected opportunities; then retrospect and the end.

But how few of the visions are realized. Faust sums up the whole of life in the twice-repeated word versagen, renounce, and history tells a similar story. Terah died in Haran; Abraham obtained but a grave in the land promised him and his children; Jacob, cheated in marriage, bitterly disappointed in his children, died in exile, leaving his descendants to become slaves in the land of Egypt; and Moses, their heroic deliverer, died in the mountains of Moab in sight of the land which he was forbidden to enter. You may answer that it is no injury that the promise is too large, the vision too grand, to be fulfilled in the span of a single life, but must become the heritage of a race. But what has been the history of Abraham's descendants? A death-grapple for existence, captivity, and dispersion. Their national existence has long been lost.

Was there ever a nation of grander promise than Greece or Rome? But Greece died of premature old age, and Rome of rottenness begotten of sin. But each of them, you will say, left a priceless heritage to the immortal race. But if Greece and Rome and a host of older nations, of which History has often forgotten the very name, have failed and died, can anything but ultimate failure await the race? Is human history to prove a story told by an idiot, or does it "signify" something? Is the great march of humanity, which Carlyle so vividly depicts, "from the inane to the inane, or from God to God?"

This is the sphinx question put to every thinking man, and on his answer hangs his life. For according to that answer, he will either flinch and turn back, or expend every drop of blood and grain of power in urging on the march.

To this question the Bible gives a clear and emphatic answer. "God created man in his own image," and then, as if men might refuse to believe so astounding a statement, it is repeated, "in the image of God created he him." When, and by what mode or process, man was created we are not told. His origin is condensed almost into a line, his present and future occupy all the rest of the book. Whence we came is important only in so far as it teaches us humility and yet assures us that we may be Godlike because we are His handiwork and children, "heirs of God and joint heirs with Christ of a heavenly inheritance."

Now has Science any answer to this vital question? Perhaps. But this much is certain; it can foretell the future only from the past. Its answer to the question whither must be an inference from its knowledge as to whence we have come. The Bible looks mainly at the present and future; Science must at least begin with the study of the past. The deciphering of man's past history is the great aim of Biology, and ultimately of all Science. For the question of Man's past is only a part of a greater question, the origin of all living species....