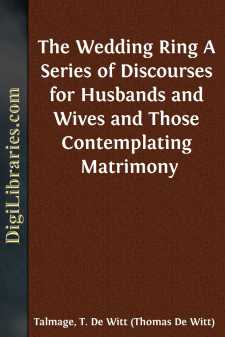 The Wedding Ring. THE CHOICE OF A WIFE.

"Is there never a woman among the daughters of thy brethren, or among all my people, that thou goest to take a wife of the uncircumcised Philistines?"—Judges 14:3.

Samson, the giant, is here asking consent of his father and mother to marriage with one whom they thought unfit for him. He was wise in asking their counsel, but not wise in rejecting it. Captivated with her looks, the big son wanted to marry a daughter of one of the hostile families, a deceitful, hypocritical, whining, and saturnine creature, who afterward made for him a world of trouble till she quit him forever. In my text his parents forbade the banns, practically saying: "When there are so many honest and beautiful maidens of your own country, are you so hard put to for a lifetime partner that you propose conjugality with this foreign flirt? Is there such a dearth of lilies in our Israelitish gardens that you must wear on your heart a Philistine thistle? Do you take a crabapple because there are no pomegranates? Is there never a woman among the daughters of thy brethren, or among all my people, that thou goest to take a wife of the uncircumcised Philistines?"

Excuseless was he for such a choice in a land and amid a race celebrated for female loveliness and moral worth, a land and a race of which self-denying Abigail, and heroic Deborah, and dazzling Miriam, and pious Esther, and glorious Ruth, and Mary, who hugged to her heart the blessed Lord, were only magnificent specimens. The midnight folded in their hair, the lakes of liquid beauty in their eye, the gracefulness of spring morning in their posture and gait, were only typical of the greater brilliance and glory of their soul. Likewise excuseless is any man in our time who makes lifelong alliance with any one who, because of her disposition, or heredity, or habits, or intellectual vanity, or moral twistification, may be said to be of the Philistines.

The world never owned such opulence of womanly character or such splendor of womanly manners or multitudinous instances of wifely, motherly, daughterly, sisterly devotion, as it owns to-day. I have not words to express my admiration for good womanhood. Woman is not only man's equal, but in affectional and religious nature, which is the best part of us, she is seventy-five per cent his superior. Yea, during the last twenty years, through the increased opportunity opened for female education, the women of the country are better educated than the majority of men; and if they continue to advance in mentality at the present ratio, before long the majority of men will have difficulty in finding in the opposite sex enough ignorance to make appropriate consort. If I am under a delusion as to the abundance of good womanhood abroad, consequent upon my surroundings since the hour I entered this life until now, I hope the delusion will last until I embark from this planet. So you will understand, if I say in this course of sermons something that seems severe, I am neither cynical nor disgruntled....