The Ways of Men 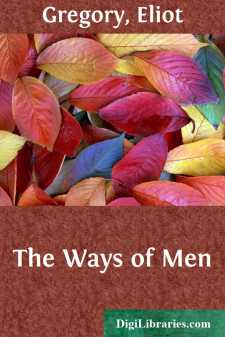 The gentleman who graced the gubernatorial armchair of our state when this century was born happened to be an admirer of classic lore and the sonorous names of antiquity.

It is owing to his weakness in bestowing pompous cognomens on our embryo towns and villages that to-day names like Utica, Syracuse, and Ithaca, instead of evoking visions of historic pomp and circumstance, raise in the minds of most Americans the picture of cocky little cities, rich only in trolley-cars and Methodist meeting-houses.

When, however, this cultured governor, in his ardor, christened one of the cities Troy, and the hill in its vicinity Mount Ida, he little dreamed that a youth was living on its slopes whose name was destined to become a household word the world over, as the synonym for the proudest and wealthiest republic yet known to history, a sobriquet that would be familiar in the mouths of races to whose continents even the titles of Jupiter or Mars had never penetrated.

A little before this century began, two boys with packs bound on their stalwart shoulders walked from New York and established a brickyard in the neighborhood of what is now Perry Street, Troy.  Ebenezer and Samuel Wilson soon became esteemed citizens of the infant city, their kindliness and benevolence winning for them the affection and respect of the community.

The younger brother, Samuel, was an especial favorite with the children of the place, whose explorations into his deep pockets were generally rewarded by the discovery of some simple “sweet” or home-made toy.  The slender youth with the “nutcracker” face proving to be the merriest of playfellows, in their love his little band of admirers gave him the pet name of “Uncle Sam,” by which he quickly became known, to the exclusion of his real name.  This is the kindly and humble origin of a title the mere speaking of which to-day quickens the pulse and moistens the eyes of millions of Americans with the same thrill that the dear old flag arouses when we catch sight of it, especially an unexpected glimpse in some foreign land.

With increasing wealth the brickyard of the Wilson brothers was replaced by an extensive slaughtering business, in which more than a hundred men were soon employed—a vast establishment for that day, killing weekly some thousand head of cattle.  During the military operations of 1812 the brothers signed a contract to furnish the troops at Greenbush with meat, “packed in full bound barrels of white oak”; soon after, Samuel was appointed Inspector of Provisions for the army.

It is a curious coincidence that England also should have taken an ex-army-contractor as her patron saint, for if we are to believe tradition, St. George of Cappadocia filled that position unsatisfactorily before he passed through martyrdom to sainthood.

True prototype of the nation that was later to adopt him as its godfather, the shrewd and honest patriot, “Uncle Sam,” not only lived loyally up to his contracts, giving full measure and of his best, but proved himself incorruptible, making it his business to see that others too fulfilled their engagements both in the letter and the spirit; so that the “U.S.” (abbreviation of United States) which he pencilled on all provisions that had passed his inspection became in the eyes of officers and soldiers a guarantee of excellence.  Samuel’s old friends, the boys of Troy (now enlisted in the army), naïvely imagining that the mystic initials were an allusion to the pet name they had given him years before, would accept no meats but “Uncle Sam’s,” murmuring if other viands were offered them.  Their comrades without inquiry followed this example; until so strong did the prejudice for food marked “U.S.” become, that other contractors, in order that their provisions should find favor with the soldiers, took to announcing “Uncle Sam” brands....