The Way To Geometry 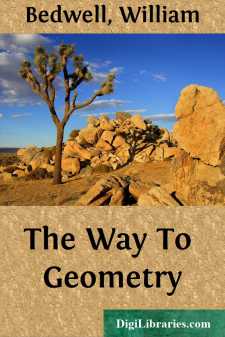 Your acquaintance with the Author before his death was not long, which I have oft heard you say, you counted your great unhappinesse, but within a short time after, you knew not well whether to count your selfe more happie in that you once knew him, or unhappy in that upon your acquaintance you so suddenly lost him. This his worke then being to come forth to the censorious eye of the world, and as the manner usually is to have some Patronage, I have thought good to dedicate it to your selfe; and that for these two reasons especially.

First, in respect of the sympathy betwixt it, and your studies; Laboures of this nature being usually offered to such persons whose profession is that way setled.

Secondly, for the great love and respect you alwayes shewed to the Author, being indeed a man that would deserve no lesse, humble, void of pride, ever ready to impart his knowledge to others in what kind soever, loving and affecting those that affected learning.

For these respects then, I offer to you this Worke of your so much honoured friend. I my selfe also (as it is no lesse my duty) for his sake striving to make you hereby some part of a requitall, least I should be found guilty of ingratitude, which is a solecisme in manners, if having so fit an opportunity, I should not expresse to the world some Testimonie of love to you, who so much loved him. I desire then (good Sir) your kind acceptance of it, you knowing so well the ability of the Author, and being also able to judge of a Worke of this nature, and in that respect the better able to defend it from the furie of envious Detractours, of which there are not few. Thus with my best wishes to you, as to my much respected friend, I rest.

Yours to be commanded in

any thing that he is able.

Friendly Reader, that which is here set forth to thy view, is a Translation out of Ramus. Formerly indeed Translated by one Mr. Thomas Hood, but never before set forth with the Demonstrations and Diagrammes, which being cut before the Authors death, and the Worke it selfe finished, the Coppie I having in mine hands, never had thought for the promulgation of it, but that it should have died with its Author, considering no small prejudice usually attends the printing of dead mens Workes, and wee see the times, the world is now all eare and tongue, the most given with the Athenians, to little else than to heare and tell newes: And if Apelles that skilfull Artist alwayes found somewhat to be amended in those Pictures which he had most curiously drawne; surely much in this Worke might have beene amended if the Authour had lived to refine it, but in that it was onely the first draught, and that he was prevented by death of a second view, though perused by others before the Presse; I was ever unwilling to the publication, but that I was often and much solicited with iteration of strong importunity, and so in the end over-ruled: perswading me from time to time unto it, and that it being finished by the Authour, it was farre better to be published, though with some errours and escapes, than to be onely moths-meat, and so utterly lost....