The Way of the Wild 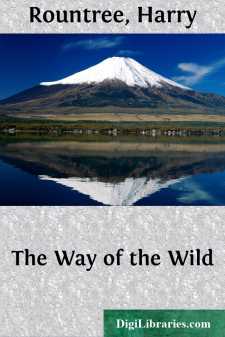 I GULO THE INDOMITABLE

If his father had been a brown bear and his mother a badger, the result in outward appearance would have been Gulo, or something very much like him. But not all the crossing in the world could have accounted for his character; that came straight from the Devil, his master. Gulo, however, was not a cross. He was himself, Gulo, the wolverine, alias glutton, alias carcajou, alias quick-hatch, alias fjeldfras in the vernacular, or, officially, Gulo luscus. But, by whatever name you called him, he did not smell sweet; and his character, too, was of a bad odor. A great man once said that he was like a bear cub with a superadded tail; but that great man cannot have seen his face. If he had, he would have looked for his double among the fiends on the top of Notre Dame. There was, in fact, nothing like him on this earth, only in a very hot place not on the earth.

He was, in short, a beast with brains that only man, and no beast, ought to be trusted with; and he had no soul. God alone knows if love, which softens most creatures, had ever come to Gulo; his behavior seemed to show that it had not. Perhaps love was afraid of him. And, upon my soul, I don't wonder.

It was not, however, a hot, but a very cold, place in the pine-forest where Gulo stood, and the unpitying moon cast a dainty tracery through the tasseled roof upon the new and glistening snow around him—the snow that comes early to those parts—and the north-east wind cut like several razors. But Gulo did not seem to care. Wrapped up in his ragged, long, untidy, uncleanly-looking, brown-black cloak—just his gray-sided, black fiend's face poking out—he seemed warm enough. When he lifted one paw to scratch, one saw that the murderous, scraping, long claws of him were nearly white; and as he set his lips in a devilish grin, his fangs glistened white in the moonlight, too.

Verily, this was no beast—he would have taped four feet and a quarter from tip to tip, if you had worn chain-mail and dared to measure him—no beast, I say, to handle with white-kid ball gloves. Things were possible from him, one felt, that were not possible of any other living creature—awful things.

Suddenly he looked up. The branches above him had stirred uneasily, as if an army were asleep there. And an army was—of wood-pigeons. Thousands upon thousands of wood-pigeons were asleep above his head, come from Heaven knows where, going to—who could tell in the end?

All at once one fell. Without apparent reason or cause, it fell. And the wolverine, with his quick, intelligent eyes, watched it fall, from branch to branch, turning over and over—oh! so softly—to the ground. When he had poked his way to it—walking flat-footed, like a bear or a railway porter—it was dead. Slain in a breath! Without a flutter, killed! By what? By disease—diphtheria. But not here would the terrible drama be worked out. This was but an isolated victim, first of the thousands that would presently succumb to the fell disease far, far over there, to the westward, hundreds of miles away, in England and Wales, perhaps, whither they were probably bound....