The Watchers of the Trails A Book of Animal Life 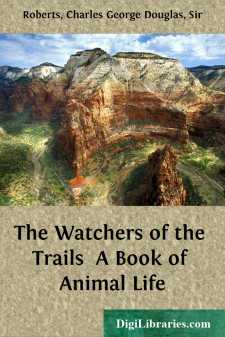 The Freedom of the Black-faced Ram

n the top of Ringwaak Hill the black-faced ram stood motionless, looking off with mild, yellow eyes across the wooded level, across the scattered farmsteads of the settlement, and across the bright, retreating spirals of the distant river, to that streak of scarlet light on the horizon which indicated the beginning of sunrise. A few paces below him, half-hidden by a gray stump, a green juniper bush, and a mossy brown hillock, lay a white ewe with a lamb at her side. The ewe's jaws moved leisurely, as she chewed her cud and gazed up with comfortable confidence at the sturdy figure of the ram silhouetted against the brightening sky.

This sunrise was the breaking of the black-faced ram's first day in the wilderness. Never before had he stood on an open hilltop and watched the light spread magically over a wide, wild landscape. Up to the morning of the previous day, his three years of life had been passed in protected, green-hedged valley pastures, amid tilled fields and well-stocked barns, beside a lilied water. This rugged, lonely, wide-visioned world into which fortune had so unexpectedly projected him filled him with wonder. Yet he felt strangely at ease therein. The hedged pastures had never quite suited him; but here, at length, in the great spaces, he felt at home. The fact was that, alike in character and in outward appearance, he was a reversion to far-off ancestors. He was the product of a freak of heredity.

In the fat-soiled valley-lands, some fifteen miles back of Ringwaak Hill, the farmers had a heavy, long-wooled, hornless strain of sheep, mainly of the Leicester breed, which had been crossed, years back, by an imported Scotch ram of one of the horned, courageous, upland, black-faced varieties. The effect of this hardy cross had apparently all been bred out, save for an added stamina in the resulting stock, which was uniformly white and hornless. When, therefore, a lamb was born with a black face and blackish-gray legs, it was cherished as a curiosity; and when, in time, it developed a splendid pair of horns, it became the handsomest ram in all the valley, and a source of great pride to its owner. But when black-faced lambs began to grow common in the hornless and immaculate flocks, the feelings of the valley folks changed, and word went around that the strain of the white-faced must be kept pure. Then it was decreed that the great horned ram should no longer sire the flocks, but be hurried to the doom of his kind and go to the shambles.

Just at this time, however, a young farmer from the backwoods settlement over behind Ringwaak chanced to visit the valley. The sheep of his settlement were not only hornless, but small and light-wooled as well, and the splendid, horned ram took his fancy. Here was a chance to improve his breed. He bought the ram for what he was worth to the butcher, and proudly led him away, over the hills and through the great woods, toward the settlement on the other side of Ringwaak.

The backwoodsman knew right well that a flock of sheep may be driven, but that a single sheep must be led; so he held his new possession securely by a piece of stout rope about ten feet long....