The Wars of the Jews; or the history of the destruction of Jerusalem 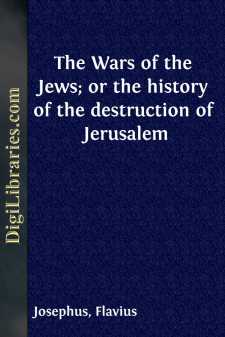 1. Whereas the war which the Jews made with the Romans hath been the greatest of all those, not only that have been in our times, but, in a manner, of those that ever were heard of; both of those wherein cities have fought against cities, or nations against nations; while some men who were not concerned in the affairs themselves have gotten together vain and contradictory stories by hearsay, and have written them down after a sophistical manner; and while those that were there present have given false accounts of things, and this either out of a humor of flattery to the Romans, or of hatred towards the Jews; and while their writings contain sometimes accusations, and sometimes encomiums, but no where the accurate truth of the facts; I have proposed to myself, for the sake of such as live under the government of the Romans, to translate those books into the Greek tongue, which I formerly composed in the language of our country, and sent to the Upper Barbarians; Joseph, the son of Matthias, by birth a Hebrew, a priest also, and one who at first fought against the Romans myself, and was forced to be present at what was done afterwards, [am the author of this work].

2. Now at the time when this great concussion of affairs happened, the affairs of the Romans were themselves in great disorder. Those Jews also who were for innovations, then arose when the times were disturbed; they were also in a flourishing condition for strength and riches, insomuch that the affairs of the East were then exceeding tumultuous, while some hoped for gain, and others were afraid of loss in such troubles; for the Jews hoped that all of their nation which were beyond Euphrates would have raised an insurrection together with them. The Gauls also, in the neighborhood of the Romans, were in motion, and the Geltin were not quiet; but all was in disorder after the death of Nero. And the opportunity now offered induced many to aim at the royal power; and the soldiery affected change, out of the hopes of getting money. I thought it therefore an absurd thing to see the truth falsified in affairs of such great consequence, and to take no notice of it; but to suffer those Greeks and Romans that were not in the wars to be ignorant of these things, and to read either flatteries or fictions, while the Parthians, and the Babylonians, and the remotest Arabians, and those of our nation beyond Euphrates, with the Adiabeni, by my means, knew accurately both whence the war begun, what miseries it brought upon us, and after what manner it ended.

3. It is true, these writers have the confidence to call their accounts histories; wherein yet they seem to me to fail of their own purpose, as well as to relate nothing that is sound. For they have a mind to demonstrate the greatness of the Romans, while they still diminish and lessen the actions of the Jews, as not discerning how it cannot be that those must appear to be great who have only conquered those that were little. Nor are they ashamed to overlook the length of the war, the multitude of the Roman forces who so greatly suffered in it, or the might of the commanders, whose great labors about Jerusalem will be deemed inglorious, if what they achieved be reckoned but a small matter....