The War With the United States : A Chronicle of 1812 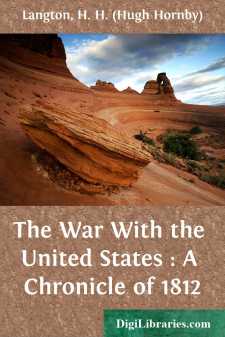 International disputes that end in war are not generally questions of absolute right and wrong. They may quite as well be questions of opposing rights. But, when there are rights on both sides; it is usually found that the side which takes the initiative is moved by its national desires as well as by its claims of right.

This could hardly be better exemplified than by the vexed questions which brought about the War of 1812. The British were fighting for life and liberty against Napoleon. Napoleon was fighting to master the whole of Europe. The United States wished to make as much as possible out of unrestricted trade with both belligerents. But Napoleon's Berlin Decree forbade all intercourse whatever with the British, while the British Orders-in-Council forbade all intercourse whatever with Napoleon and his allies, except on condition that the trade should first pass through British ports. Between two such desperate antagonists there was no safe place for an unarmed, independent, 'free-trading' neutral. Every one was forced to take sides. The British being overwhelmingly strong at sea, while the French were correspondingly strong on land, American shipping was bound to suffer more from the British than from the French. The French seized every American vessel that infringed the Berlin Decree whenever they could manage to do so. But the British seized so many more for infringing the Orders-in-Council that the Americans naturally began to take sides with the French.

Worse still, from the American point of view, was the British Right of Search, which meant the right of searching neutral merchant vessels either in British waters or on the high seas for deserters from the Royal Navy. Every other people whose navy could enforce it had always claimed a similar right. But other peoples' rights had never clashed with American interests in at all the same way. What really roused the American government was not the abstract Right of Search, but its enforcement at a time when so many hands aboard American vessels were British subjects evading service in their own Navy. The American theory was that the flag covered the crew wherever the ship might be. Such a theory might well have been made a question for friendly debate and settlement at any other time. But it was a new theory, advanced by a new nation, whose peculiar and most disturbing entrance on the international scene could not be suffered to upset the accepted state of things during the stress of a life-and-death war. Under existing circumstances the British could not possibly give up their long-established Right of Search without committing national suicide. Neither could they relax their own blockade so long as Napoleon maintained his. The Right of Search and the double blockade of Europe thus became two vexed questions which led straight to war.

But the American grievances about these two questions were not the only motives impelling the United States to take up arms. There were two deeply rooted national desires urging them on in the same direction....