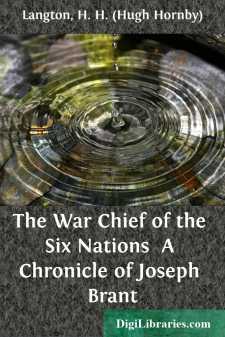 CHAPTER I THE YOUNG MOHAWK

A group of huntsmen were camping on the Ohio river. The foliage swayed in the night wind, and the argent light of the moon ran in fleeting bars through the dim recesses of the forest. From the ground arose a ruddier glare. High and dry, fires had been built and the flames were darting and curvetting among the trees. In the weird light the hunters were clustered about in squads, silently stripping their prey or preparing their weapons for the morrow's chase. In the background were the women, moving here and there in the dancing shadows. One was bending low over a newborn infant, and as she uttered his name in the stillness of the evening it blended with the music of the tree-tops.

The name was taken from the great book of nature. It was a birth-name of the Mohawks meaning two sticks of wood bound together, a sign of strength; and the woman hoped that her tiny child might one day be a man of valour among the Mohawks. Could she have but known it, her desire was to be more than realized, for in vigour of mind and body he was destined to surpass all the offspring of his race.

So it was, in the pear 1742, in the reign of King George the Second, that Thayendanegea was born among the Mohawks on the banks of the Ohio. To the untaught savage this sluggish stream was a thing of life, and he called it the 'River Beautiful.' The Ohio valley was at this time the favourite hunting-ground of the Indian peoples. Because this valley was rich in game and comfortable to dwell in, it had been a scene of bitter strife. The problem of rule on the Ohio was of long standing. For a whole century Delaware and Shawnee and Wyandot and Six Nations contended for the territory; tribe was pitted against tribe, and then at last the answer was given. The Iroquois confederacy, or Six Nations, [Footnote: Mohawks, Cayugas, Senecas, Oneidas, Onondagas, and Tuscaroras.] whose villages lay by the Hudson river, united, determined, and vengeful, had gained the ascendancy; from the banks of the Hudson to the seats of the stranger beside lake Erie the lands belonged to them; and other tribes to the east and west and north and south paid them tribute. The Mohawks were the mightiest of the Six Nations; in the confederacy they were chief in council; from their ranks was chosen the head war chief, who commanded on the field of battle; they took the first-fruits of the chase, and were leaders in everything.

Some time was to pass, however, before Thayendanegea could understand that he was sprung from a race of conquerors. As yet he was but a simple Indian babe, with staring brown eyes and raven-black hair. Of the mother who cared for him history has practically nothing to say. She may have been a Mohawk, but this is by no means certain. It has even been hinted that she came from the Western Indians, and was a damsel of the Shawnee race who had left the wigwams of her people. At all events we may be sure that she had the natural instincts and impulses of a forest mother; that she knew where the linden grew high and where the brown-red sycamores clustered thick by the margin of the stream....