The War Chief of the Ottawas : A chronicle of the Pontiac war 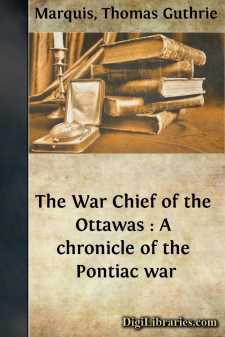 CHAPTER I THE TIMES AND THE MEN

There was rejoicing throughout the Thirteen Colonies, in the month of September 1760, when news arrived of the capitulation of Montreal. Bonfires flamed forth and prayers were offered up in the churches and meeting-houses in gratitude for deliverance from a foe that for over a hundred years had harried and had caused the Indians to harry the frontier settlements. The French armies were defeated by land; the French fleets were beaten at sea. The troops of the enemy had been removed from North America, and so powerless was France on the ocean that, even if success should crown her arms on the European continent, where the Seven Years' War was still raging, it would be impossible for her to transport a new force to America. The principal French forts in America were occupied by British troops. Louisbourg had been razed to the ground; the British flag waved over Quebec, Montreal, and Niagara, and was soon to be raised on all the lesser forts in the territory known as Canada. The Mississippi valley from the Illinois river southward alone remained to France. Vincennes on the Wabash and Fort Chartres on the Mississippi were the only posts in the hinterland occupied by French troops. These posts were under the government of Louisiana; but even these the American colonies were prepared to claim, basing the right on their 'sea to sea' charters.

The British in America had found the strip of land between the Alleghanies and the Atlantic far too narrow for a rapidly increasing population, but their advance westward had been barred by the French. Now, praise the Lord, the French were out of the way, and American traders and settlers could exploit the profitable fur-fields and the rich agricultural lands of the region beyond the mountains. True, the Indians were there, but these were not regarded as formidable foes. There was no longer any occasion to consider the Indians—so thought the colonists and the British officers in America. The red men had been a force to be reckoned with only because the French had supplied them with the sinews of war, but they might now be treated like other denizens of the forest—the bears, the wolves, and the wild cats. For this mistaken policy the British colonies were to pay a heavy price.

The French and the Indians, save for one exception, had been on terms of amity from the beginning. The reason for this was that the French had treated the Indians with studied kindness. The one exception was the Iroquois League or Six Nations. Champlain, in the first years of his residence at Quebec, had joined the Algonquins and Hurons in an attack on them, which they never forgot; and, in spite of the noble efforts of French missionaries and a lavish bestowal of gifts, the Iroquois thorn remained in the side of New France. But with the other Indian tribes the French worked hand in hand, with the Cross and the priest ever in advance of the trader's pack. French missionaries were the first white men to settle in the populous Huron country near Lake Simcoe....