The Wanderers Adventures in the Wilds of Trinidad and Orinoco 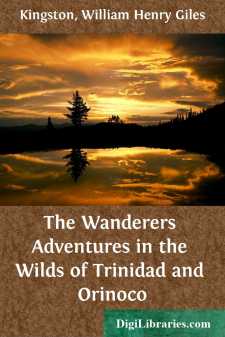 We lived very happily at the dear old home in the State of Pennsylvania, where my sister Marian and I were born. Our father, Mr Dennis Macnamara, who was a prosperous merchant, had settled there soon after his marriage with our mother, and we had been brought up with every comfort we could desire. Uncle Paul Netherclift, our mother’s brother, who was employed in our father’s house of business, resided with us; as did our cousin Arthur Tuffnel, who had lately come over from England to find employment in the colony.

Our father was generally in good spirits, and never appeared to think that a reverse of fortune could happen to him. One day, however, he received a visit from a person who was closeted with him for some hours. After the stranger had gone, he appeared suddenly to have become an altered man, his vivacity and high spirits having completely deserted him—while both Uncle Paul and Arthur looked unusually grave; and young as I was, I could not help seeing that something disastrous had happened. My fears were confirmed on overhearing a conversation between my father and mother when they were not aware that I was listening.

“We must start without delay. I must not allow this opportunity of retrieving my fallen fortunes to pass by,” I heard my father observe, as he pointed to a paragraph in a newspaper which he held in his hand. “The Spanish Government have passed an edict, permitting all foreigners of the Roman Catholic religion to establish themselves in the beautiful and fertile island of Trinidad, where they are to be protected for five years from being pursued for debts incurred in the places they have quitted. Now, if we can manage to get there in safety, my creditors will be unable to touch me, and I shall soon have the means of paying my debts and recovering the position I have lost.”

“But, my dear husband, it would soon be discovered that we are not Roman Catholics; and we should be placed in an embarrassing, if not in a dangerous position, were we to do as you propose,” observed my mother in a tone of expostulation. “You would not, surely, have us conform, even outwardly, to a religion in which we have no faith?”

“Depend on it, no questions will be asked, as it will be taken for granted that all persons settling in the island belong to the ordinary form of religion sanctioned by the Government,” answered my father.

My mother sighed, for she saw that my father was wrong, and that, blinded like Lot of old by his desire to obtain worldly advantages, he was ready to sacrifice the religious principles he professed. I am compelled, though with much pain, to write this.

It was settled that we should start at once for Baltimore, to embark on board a vessel bound from that place to Trinidad. Uncle Paul and Arthur were to remain behind to arrange my father’s affairs, and to follow us as soon as possible.

The only other person to whom my father made known his intentions, was Timothy Nolan, who had come out with him from Old Ireland, when quite a boy, as his servant....