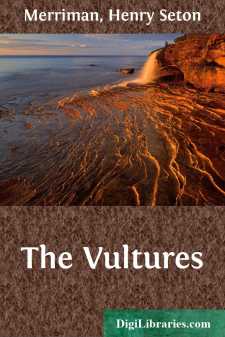 Mr. Joseph P. Mangles, at his ease in a deck-chair on the broad Atlantic, was smoking a most excellent cigar. Mr. Mangles was a tall, thin man, who carried his head in the manner curtly known at a girls' school as "poking." He was a clean-shaven man, with bony forehead, sunken cheeks, and an underhung mouth. His attitude towards the world was one of patient disgust. He had the air of pushing his way, chin first, doggedly through life. The weather had been bad, and was now moderating. But Mr. Mangles had not suffered from sea-sickness. He was a dry, hard person, who had suffered from nothing but chronic dyspepsia—had suffered from it for fifty years or so.

"Fine weather," he said. "Women will be coming on deck—hang the fine weather."

And his voice was deep and low like a growl.

"Joseph," said Miss Mangles, "growls over his meals like a dog."

The remark about the weather and the women was addressed to a man who leaned against the rail. Indeed, there was no one else near—and the man made no reply. He was twenty-five or thirty years younger than Mr. Mangles, and looked like an Englishman, but not aggressively so. The large majority of Britons are offensively British. Germans are no better; so it must be racial, this offensiveness. A Frenchman is at his worst, only comically French—a matter of a smile; but Teutonic characteristics are conducive to hostility.

The man who leaned against the rail near to Joseph P. Mangles was six feet high, and rather heavily built, but, like many big men, he seemed to take up no more than his due share of room in this crowded world. There was nothing distinctive about his dress. His demeanor was quiet. When he spoke he was habitually asked to repeat his remark, which he did, with patience, in the same soft, inaudible voice.

There were two men on board this great steamer who were not business men—Joseph P. Mangles and Reginald Cartoner; and, like two ships on a sea of commercial interests, they had drifted together during the four days that had elapsed since their departure from New York. Neither made anything, or sold anything, or had a card in his waistcoat-pocket ready for production at a moment's notice, setting forth name and address and trade. Neither was to be suspected of a desire to repel advances, and yet both were difficult to get on with. For human confidences must be mutual. It is only to God that man can continue telling, telling, telling, and getting never a word in return. These two men had nothing to tell their fellows about themselves; so the other passengers drifted away into those closely linked corporations characteristic of steamer life and left them to themselves—to each other.

And they had never said things to each other—had never, as it were, got deeper than the surface of their daily life.

Cartoner was a dreamy man, with absorbed eyes, rather deeply sunk under a strong forehead. His eyelids had that peculiarity which is rarely seen in the face of a man who is a nonentity. They were quite straight, and cut across the upper curve of the pupil....