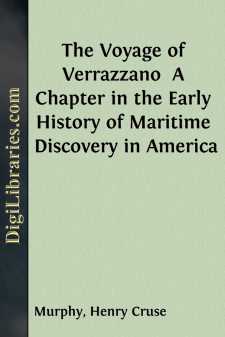 THE DISCOVERY ATTRIBUTED TO VERRAZZANO.

The discovery of the greater portion of the Atlantic coast of North America, embracing all of the United States north of Cape Roman in South Carolina, and of the northern British provinces as far at least as Cape Breton, by Giovanni da Verrazzano, a Florentine, in the service of the king of France, has received until quite recently the assent of all the geographers and historians who have taken occasion to treat of the subject. This acknowledgment, for more than three hundred years, which would seem to preclude all question in regard to its authenticity at this late day, has, however, been due more to the peculiar circumstances of its publication than to any evidence of its truth. The only account of it which exists, is contained in a letter purporting to have been written by the discoverer himself, and is not corroborated by the testimony of any other person, or sustained by any documentary proof. It was not published to the world until it appeared for the first time in Italy, the birth place of the navigator, more than thirty years after the transactions to which it relates are alleged to have taken place; and it has not, up to the present time, received any confirmation in the history of France, whose sovereign, it is asserted, sent forth the expedition, and to whose crown the right of the discovery accordingly attached. Yet it is not difficult to comprehend how the story, appealing to the patriotic sympathies of Ramusio, was inconsiderately adopted by him, and inserted in his famous collection of voyages, and thus receiving his sanction, was not unwillingly accepted, upon his authority, by the French nation, whose glory it advanced, without possibly its having any real foundation. And as there never was any colonization or attempt at possession of the country in consequence of the alleged discovery, or any assertion of title under it, except in a single instance of a comparatively modern date, and with no important hearing, it is no less easy to understand, how thus adopted and promulgated by the only countries interested in the question, the claim was admitted by other nations without challenge or dispute, and has thus become incorporated into modern history without investigation.

Although the claim has never been regarded of any practical importance in the settlement of the country, it has nevertheless possessed an historical and geographical interest in connection with the origin and progress of maritime discovery on this continent. Our own writers assuming its validity, without investigation, have been content to trace, if possible, the route of Verrazzano and point out the places he explored, seeking merely to reconcile the account with the actual condition and situation of the country. Their explanations, though sometimes plausible, are often contradictory, and not unfrequently absurd. Led into an examination of its merits with impressions in its favor, we have nevertheless been compelled to adopt the conclusion of a late American writer, that it is utterly fictitious....