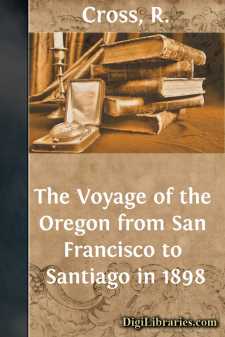 ALMOST ten years have passed since the country followed, in scanty telegram from port to port, the Oregon speeding down one side of a continent and up the other to Bahia; then came two anxious, silent weeks when apprehension and fear pictured four Spanish cruisers with a pack of torpedo boats sailing out into the west athwart the lone ship's course, the suspense ending only when tidings came of her arrival at Jupiter Inlet; then off Santiago, after a month of waiting, there is the outcoming of Cervera's squadron, when this splendid ship, with steam all the time up, leaps to the front of her sisters of the fleet, like an unleashed hound, and joins the historic company of the Bon Homme Richard, the Constitution, the Hartford, in our naval annals. From the start at the Golden Gate to the beaching of the Colon is a succession of events full of thrilling merit and vitality which official bickerings and envyings cannot change or obscure.

The story has been told from the standpoint of the quarter-deck, the court room, and the department bureau. Here we have the artless journal of an unlettered sailor, written between decks, without the least notion that it would ever be read apart from his own family circle. The pages of his record give an insight into the mutual regard and confidence existing between the captain and his crew which made the voyage the memorable achievement that it was. Admiral Clark would be made of stolid stuff were he indifferent to the enthusiasm and loyalty manifest in the narrative in various ways, in none, however, more hearty and sincere than in the endearing designations of the "old gent" and "the old man." He was in fact fifty-four years of age when he became captain of the Oregon. Shortly before, he had been on special duty in the North Pacific at the head of a fleet of seven men-of-war, at that time the largest cruising fleet in our navy since the conflict with the Confederacy. Starting as midshipman at the Naval Academy in 1860, he had seen thirty-eight years of active and varied service in all seas. In the contest with Spain the commanders of the various warships were his associates at the academy. Sampson had been his instructor there; Gridley, who opened the battle of Manila, and Cook, who received the surrender of the Colon, were classmates; and Dayton, who rendered distinguished service at San Juan, was a relative. In the transition from wood to iron in naval architecture he has had command in every type of fighting craft beginning with the wooden Ossipee, when he took part at Mobile Bay in ramming the ironclad Tennessee, and, as ensign in charge of the forward guns, was the first to exchange words with the latter's commander as he came out of the casemate to surrender his ship, and ending with the Oregon.

The narrative which follows of the voyage from San Francisco to Santiago in 1898 was called to light by a communication of Admiral Clark to the press in the winter of 1907 relating to the Straits of Magellan. The writer of the narrative, who was a member of the Oregon's crew, sent it to his sisters through whom in consequence of reading the Admiral's mention of that ship's passage of the Straits, it came to him....