The Voyage of the Beagle 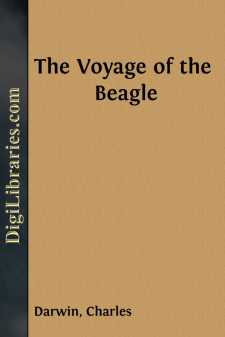 The Tinochorus is closely related to some other South American birds. Two species of the genus Attagis are in almost every respect ptarmigans in their habits; one lives in Tierra del Fuego, above the limits of the forest land; and the other just beneath the snow-line on the Cordillera of Central Chile. A bird of another closely allied genus, Chionis alba, is an inhabitant of the antarctic regions; it feeds on sea-weed and shells on the tidal rocks. Although not web footed, from some unaccountable habit, it is frequently met with far out at sea. This small family of birds is one of those which, from its varied relations to other families, although at present offering only difficulties to the systematic naturalist, ultimately may assist in revealing the grand scheme, common to the present and past ages, on which organized beings have been created.

The genus Furnarius contains several species, all small birds, living on the ground, and inhabiting open dry countries. In structure they cannot be compared to any European form. Ornithologists have generally included them among the creepers, although opposed to that family in every habit. The best known species is the common oven-bird of La Plata, the Casara or housemaker of the Spaniards. The nest, whence it takes its name, is placed in the most exposed situations, as on the top of a post, a bare rock, or on a cactus. It is composed of mud and bits of straw, and has strong thick walls: in shape it precisely resembles an oven, or depressed beehive. The opening is large and arched, and directly in front, within the nest, there is a partition, which reaches nearly to the roof, thus forming a passage or antechamber to the true nest.

Another and smaller species of Furnarius (F. cunicularius), resembles the oven-bird in the general reddish tint of its plumage, in a peculiar shrill reiterated cry, and in an odd manner of running by starts. From its affinity, the Spaniards call it Casarita (or little housebuilder), although its nidification is quite different. The Casarita builds its nest at the bottom of a narrow cylindrical hole, which is said to extend horizontally to nearly six feet under ground. Several of the country people told me, that when boys, they had attempted to dig out the nest, but had scarcely ever succeeded in getting to the end of the passage. The bird chooses any low bank of firm sandy soil by the side of a road or stream. Here (at Bahia Blanca) the walls round the houses are built of hardened mud, and I noticed that one, which enclosed a courtyard where I lodged, was bored through by round holes in a score of places. On asking the owner the cause of this he bitterly complained of the little casarita, several of which I afterwards observed at work. It is rather curious to find how incapable these birds must be of acquiring any notion of thickness, for although they were constantly flitting over the low wall, they continued vainly to bore through it, thinking it an excellent bank for their nests. I do not doubt that each bird, as often as it came to daylight on the opposite side, was greatly surprised at the marvellous fact.

I have already mentioned nearly all the mammalia common in this country. Of armadilloes three species occur namely, the Dasypus minutus or pichy, the D. villosus or peludo, and the apar. The first extends ten degrees further south than any other kind; a fourth species, the Mulita, does not come as far south as Bahia Blanca. The four species have nearly similar habits; the peludo, however, is nocturnal, while the others wander by day over the open plains, feeding on beetles, larvae, roots, and even small snakes. The apar, commonly called mataco, is remarkable by having only three moveable bands; the rest of its tesselated covering being nearly inflexible. It has the power of rolling itself into a perfect sphere, like one kind of English woodlouse....