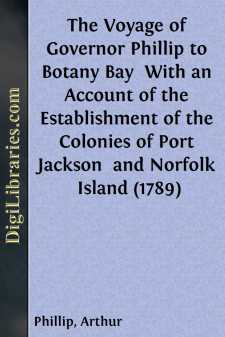 Arthur Phillip is one of those officers, who, like Drake, Dampier, and Cook, has raised himself by his merit and his services, to distinction and command. His father was Jacob Phillip, a native of Frankfort, in Germany, who having settled in England, maintained his family and educated his son by teaching the languages. His mother was Elizabeth Breach, who married for her first husband, Captain Herbert of the navy, a kinsman of Lord Pembroke. Of her marriage with Jacob Phillip, was her son, Arthur, born in the parish of Allhallows, Bread-street, within the city of London, on the 11th of October, 1738.

Being designed for a seafaring life, he was very properly sent to the school of Greenwich, where he received an education suitable to his early propensities. At the age of sixteen, he began his maritime career, under the deceased Captain Michael Everet of the navy, at the commencement of hostilities, in 1755: and at the same time that he learned the rudiments of his profession under that able officer, he partook with him in the early misfortunes, and subsequent glories of the seven years war. Whatever opulence Phillip acquired from the capture of the Havannah, certain it is, that, at the age of twenty-three, he there was made a Lieutenant into the Stirling-castle, on the 7th of June, 1761, by Sir George Pococke, an excellent judge of naval accomplishments.

But of nautical exploits, however they may raise marine officers, there must be an end. Peace, with its blessings, was restored in 1763. And Phillip now found leisure to marry; and to settle at Lyndhurst, in the New Forest, where he amused himself with farming, and like other country gentlemen, discharged assiduously those provincial offices, which, however unimportant, occupy respectably the owners of land, who, in this island, require no office to make them important.

But sailors, like their own element, are seldom at rest. Those occupations, which pleased Phillip while they were new, no longer pleased him when they became familiar. And he hastened to offer his skill and his services to Portugal when it engaged in warfare with Spain. His offer was readily accepted, because such skill and services were necessary amidst an arduous struggle with a too powerful opponent. And, such was his conduct and such his success, that when the recent interference of France, in 1778, made it his duty to fight for his king, and to defend his country, the Portugueze court regretted his departure, but applauded his motive.

His return was doubtless approved by those who, knowing his value, could advance his rank: For he was made master and commander into the Basilisk fireship, on the 2d of September, 1779. But in her he had little opportunity of displaying his zeal, or of adding to his fame. This step, however, led him up to a higher situation; and he was made post-captain into the Ariadne frigate, on the 13th of November, 1781, when he was upwards of three and forty. This is the great epoch in the lives of our naval officers, because it is from this that they date their rank....