The Vote That Made the President 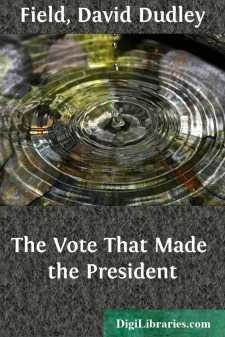 THE VOTE THAT MADE THE PRESIDENT.

Mr. Hayes was thus declared elected by a majority of one. If any vote counted for him had been counted on the other side, Mr. Tilden, instead of Mr. Hayes, would have had the 185 votes; if it had been rejected altogether, each would have had 184 votes, and the House of Representatives would immediately have elected Mr. Tilden. One vote, therefore, put Mr. Hayes into the presidential office.

To make up the 185 votes counted for him, 8 came from Louisiana and 4 from Florida. Whether they should have been thus counted is a question that affects the honor, the conscience, and the interests of the American people. There is not a person living in this country who has not a direct concern in a just answer. Not one will ever live in it whose respect for this generation will not depend in some degree upon that answer.

The 12 votes were not all alike. Some had one distinction, some another. But, not to distract attention by the discussion of several transactions instead of one, and because one in the present instance actually determined the result, I will confine my observations to a single vote. For this purpose let us take one of the votes from Louisiana, that, for instance, of Orlando H. Brewster.

Brewster was not appointed an elector, inasmuch as he did not receive a majority of the votes cast by the people of Louisiana, and inasmuch also as he could not have been appointed if he had received them all.

He did not receive a Majority of the Votes.

It would be a waste of time and patience to go through the testimony taken by the two Houses of Congress for their own information, before they consented to call in the advice of the Electoral Commission. The evidence of wrongs on both sides, and the irreconcilable contradictions of witnesses, made President Seelye and Mr. Pierce, of Massachusetts, declare it to be impossible for them to reach a satisfactory conclusion upon the facts, and compelled them to break away from their party, and refuse to abide by the advice of the Commission. There are certain things, however, which we know beyond dispute, or about which there is and can be no controversy, and these only will I mention. We know that the number of votes cast in Louisiana for the Tilden electors, taking the first name on the list as representing all, was 83,723, but that the certificate of the Returning Board put them at 70,508, turning Mr. Tilden's majority of more than 6,000 into a majority for Mr. Hayes; and we know that the reduction was made by throwing out more than 13,000 votes of legal voters voting legally for Mr. Tilden, and that more than 10,000 of these were thrown out upon the assumed authority of a statute of Louisiana, which in terms gave the board power to throw out votes, upon examination and deliberation, "whenever, from any poll or voting-place, there shall be received the statement of any supervisor of registration or commissioner of election, in form as required by section 26 of this act, on affidavit of three or more citizens, of any riot, tumult, acts of violence, intimidation, armed disturbance, bribery, or corrupt influences, which prevented, or tended to prevent, a fair, free, and peaceable vote of all qualified electors entitled to vote at such poll or voting-place."

Whether the statute itself has its warrant in the Constitution is a question not necessary now to be considered. For my part, I cannot see the authority for taking out of the ballot-boxes the ballots of lawful voters and throwing them away because other voters did not vote, whatever may have been the cause of their not voting, whether they were frightened, foolish, or perverse....