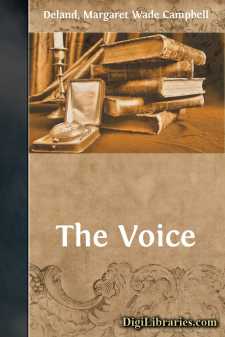 "Dr. Lavendar," said William King, "some time when Goliath is doing his 2.40 on a plank road, don't you want to pull him up at that house on the Perryville pike where the Grays used to live, and make a call? An old fellow called Roberts has taken it; he is a—"

"Teach your grandmother," said Dr. Lavendar; "he is an Irvingite. He comes from Lower Ripple, down on the Ohio, and he has a daughter, Philippa."

"Know them? Of course I know them! Do you think you are the only man who tries to enlarge his business? But I was not successful in my efforts. The old gentleman doesn't go to any church; and the young lady inclines to the Perryville meeting-house—the parson there is a nice boy."

"She is an attractive young creature," said the doctor, smiling at some pleasant memory; "the kind of girl a man would like to have for a daughter. But did you ever know such an old-fashioned little thing!"

"Well, she's like the girls I knew when I was the age of the Perryville parson, so I suppose you'd call her old-fashioned," Dr. Lavendar said. "There aren't many such girls nowadays; sweet-tempered and sensible and with some fun in 'em."

"Why don't you say 'good,' too?" William King inquired.

"Unnecessary," Dr. Lavendar said, scratching Danny's ear; "anybody who is amiable, sensible, and humorous is good. Can't help it."

"The father is good," William King said, "but he is certainly not sensible. He's an old donkey, with his TONGUES and his VOICE!"

"What on earth is an Irvingite, anyhow?" William asked.

Dr. Lavendar looked at him, pityingly: "William, you are so ridiculously young! Well, I suppose you can't help it. My boy, about the time you were born, there was a man in London—some folks called him a saint, and some folks called him a fool; it's a way folks have had ever since our Lord came into this world. His name was Irving, and he started a new sect." (Dr. Lavendar was as open-minded as it is possible for one of his Church to be, but even he said "sect" when it came to outsiders.)

"He started this new sect, which believed that the Holy Ghost would speak again by human lips, just as on the Day of Pentecost. Well, there was 'speaking' in his congregation; sort of outbursts of exhortation, you know. Mostly unintelligible. I remember Dr. Alexander said it was 'gibberish'; he heard some of it when he was in London. It may have been 'gibberish,' but nobody can doubt Irving's sincerity in thinking it was the Voice of God. When he couldn't understand it, he just called it an 'unknown tongue.' Of course he was considered a heretic. He was put out of his Church. He died soon after, poor fellow."

"Doesn't Mr. Roberts's everlasting arguing about it tire you out?" William asked.

"Oh no," Dr. Lavendar said, cheerfully; "when he talks too long I just shut my eyes; he never notices it! He's a gentle old soul. When I answer back—once in a while I really have to speak up for the Protestant Episcopal Church—I feel as if I had kicked Danny." William King grinned....