The Vnfortunate Traveller, or The Life Of Jack Wilton With An Essay On The Life And Writings Of Thomas Nash By Edmund Gosse 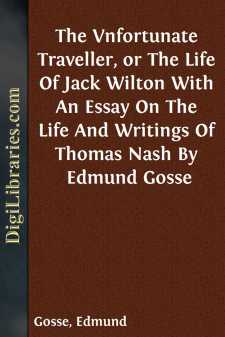 AN ESSAY ON THE LIFE AND WRITINGS OF THOMAS NASH.

It is mainly, no doubt, but I hope not exclusively, an antiquarian interest which attaches to the name of Thomas Nash. It would be absurd to claim for a writer so obscure a very prominent place in the procession of Englishmen of letters. His works proclaim by their extreme rarity the fact that three centuries of readers have existed cheerfully and wholesomely without any acquaintance with their contents. At the present moment, the number of those living persons who have actually perused the works of Nash may probably be counted on the fingers of two hands. Most of these productions are uncommon to excess, one or two exist in positively unique examples. There is no use in arguing against such a fact as this. If Nash had reached, or even approached, the highest order of merit, he would have been placed, long ere this, within the reach of all. Nevertheless, his merits, relative if not positive, were great. In the violent coming of age of Elizabethan literature, his voice was heard loudly, not always discordantly, and with an accent eminently personal to himself. His life, though shadowy, has elements of picturesqueness and pathos; his writings are a storehouse of oddity and fantastic wit

It has been usual to class Nash with the Precursors of Shakespeare, and until quite lately it was conjectured that he was older than Greene and Peele, a contemporary of Lodge and Chapman. It is now known that he was considerably younger than all these, and even than Marlowe and Shakespeare. Thomas Nash, the fourth child of the Rev. William Nash, who to have been curate of Lowestoft in Suffolk, was baptized in that town in November, 1567. The Nashes continued to live in Lowestoft, where the father died in 1603, probably three years after the death of his son Thomas. Of the latter we hear nothing more until, in October, 1582, at the age of fifteen, he matriculated as a sizar of St. John's College, Cambridge. Cooper says that he was admitted a scholar on the Lady Margaret's foundation in 1584. He remained at Cambridge, in unbroken residence, until July, 1589, "seven year together, lacking a quarter," as he tells us positively in "Lenten Stuff."

Cambridge was the hotbed of all that was vivid and revolutionary in literature at that moment, and Robert Greene was the centre of literary Cambridge. When Nash arrived, Greene, who was seven years his senior, was still in residence at his study in Clare Hall, having returned from his travels in Italy and Spain, ready, in 1583, to take his degree as master of arts. He was soon, however, to leave for London, and it is unlikely that a boy of sixteen would be immediately admitted to the society of those "lewd wags" who looked up to the already distinguished Greene as to a master. But Greene, without doubt, made frequent visits to his university, and on one of these was probably formed that intimate friendship with Nash which lasted until near the elder poet's death. Marlowe was at Corpus, then called Benet College, during five years of Nash's residence, but it is by no means certain that their acquaintance began so early....