by Francis B. (Francis Bail) Pearson 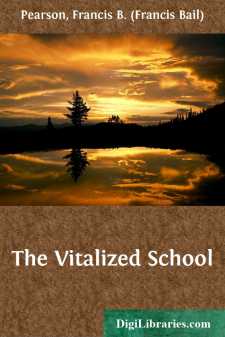 Life and living compared.—There is a wide difference between school-teaching and teaching school. The question “Is she a school-teacher?” means one thing; but the question “Can she teach school?” means quite another. School-teaching may be living; but teaching school is life. And any one who has a definition of life can readily find a definition for teaching school. Much of the criticism of the work of the schools emanates from sources that have a restricted concept of life. The artisan who defines life in terms of his own trade is impatient with much that the school is trying to do. He would have the scope of the school narrowed to his concept of life. If art and literature are beyond the limits of his concept, he can see no warrant for their presence in the school. The work of the schools cannot be standardized until life itself is standardized, and that is neither possible nor desirable. The glory of life is that it does not have fixity, that it is ever crescent.

Teaching defined.—Teaching school may be defined, therefore, as the process of interpreting life by the laboratory method. The teacher’s work is to open the gates of life for the pupils. But, before these gates can be opened, the teacher must know what and where they are. This view of the teacher’s work is neither fanciful nor fantastic; quite the contrary. Life is the common heritage of people young and old, and the school should be so organized and administered as to teach people how to use this heritage to the best advantage both for themselves and for others. If a child should be absent from school altogether, or if he should be incarcerated in prison from his sixth to his eighteenth year, he would still have life. But, if he is in school during those twelve years, he is supposed to have life that is of better quality and more abundant. Life is not measured by years, but by its own intensity and scope. It has often been said that some people have more life in threescore and ten years than Methuselah had in his more than nine hundred years.

Life measured by intensity.—This statement is not demonstrable, of course, but it serves to make evident the fact that some people have more of life in a given time than others in the same time. In this sense, life may be measured by the number of reactions to objectives. These reactions may be increased by training. Two persons, in passing a shop-window, may not see the same objects; or one may see twice as many as the other, according to their ability to react. The man who was locked in a vault at the cemetery by accident, and was not discovered for an hour, thought he had spent four days in his imprisonment. He had really lived four days in a single hour by reason of the intensity of life during that hour.

Illustrations.—In the case of dreams, we are told that years may be condensed into minutes, or even seconds, by reason of the rapidity of reactions. The rapidity and intensity of these reactions make themselves manifest on the face of the dreamer....