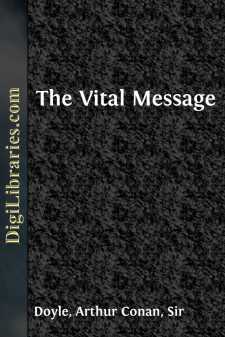 CHAPTER I THE TWO NEEDFUL READJUSTMENTS

It has been our fate, among all the innumerable generations of mankind, to face the most frightful calamity that has ever befallen the world. There is a basic fact which cannot be denied, and should not be overlooked. For a most important deduction must immediately follow from it. That deduction is that we, who have borne the pains, shall also learn the lesson which they were intended to convey. If we do not learn it and proclaim it, then when can it ever be learned and proclaimed, since there can never again be such a spiritual ploughing and harrowing and preparation for the seed? If our souls, wearied and tortured during these dreadful five years of self-sacrifice and suspense, can show no radical changes, then what souls will ever respond to a fresh influx of heavenly inspiration? In that case the state of the human race would indeed be hopeless, and never in all the coming centuries would there be any prospect of improvement.

Why was this tremendous experience forced upon mankind? Surely it is a superficial thinker who imagines that the great Designer of all things has set the whole planet in a ferment, and strained every nation to exhaustion, in order that this or that frontier be moved, or some fresh combination be formed in the kaleidoscope of nations. No, the causes of the convulsion, and its objects, are more profound than that. They are essentially religious, not political. They lie far deeper than the national squabbles of the day. A thousand years hence those national results may matter little, but the religious result will rule the world. That religious result is the reform of the decadent Christianity of to-day, its simplification, its purification, and its reinforcement by the facts of spirit communion and the clear knowledge of what lies beyond the exit-door of death. The shock of the war was meant to rouse us to mental and moral earnestness, to give us the courage to tear away venerable shams, and to force the human race to realise and use the vast new revelation which has been so clearly stated and so abundantly proved, for all who will examine the statements and proofs with an open mind.

Consider the awful condition of the world before this thunder-bolt struck it. Could anyone, tracing back down the centuries and examining the record of the wickedness of man, find anything which could compare with the story of the nations during the last twenty years! Think of the condition of Russia during that time, with her brutal aristocracy and her drunken democracy, her murders on either side, her Siberian horrors, her Jew baitings and her corruption. Think of the figure of Leopold of Belgium, an incarnate devil who from motives of greed carried murder and torture through a large section of Africa, and yet was received in every court, and was eventually buried after a panegyric from a Cardinal of the Roman Church—a church which had never once raised her voice against his diabolical career. Consider the similar crimes in the Putumayo, where British capitalists, if not guilty of outrage, can at least not be acquitted of having condoned it by their lethargy and trust in local agents....