The Vision of Sir Launfal And Other Poems by James Russell Lowell; Edited with an Introduction and Notes by Julian W. Abernethy, PH.D. 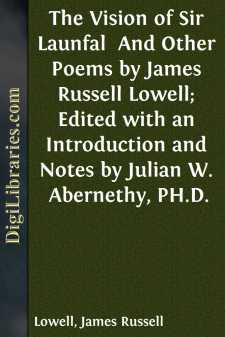 In Cambridge there are two literary shrines to which visitors are sure to find their way soon after passing the Harvard gates, "Craigie House," the home of Longfellow and "Elmwood," the home of Lowell. Though their hallowed retirement has been profaned by the encroachments of the growing city, yet in their simple dignity these fine old colonial mansions still bespeak the noble associations of the past, and stand as memorials of the finest products of American culture.

Elmwood was built before the Revolution by Thomas Oliver, the Tory governor, who signed his abdication at the invitation of a committee of "about four thousand people" who surrounded his house at Cambridge. The property was confiscated by the Commonwealth and used by the American army during the war. In 1818 it was purchased by the Rev. Charles Lowell, pastor of the West Congregational Church in Boston, and after ninety years it is still the family home. Here was born, February 22, 1819, James Russell Lowell, with surroundings most propitious for the nurturing of a poet-soul. Within the stately home there was a refined family life; the father had profited by the unusual privilege of three years' study abroad, and his library of some four thousand volumes was not limited to theology; the mother, whose maiden name was Spence and who traced her Scotch ancestry back to the hero of the ballad of Sir Patrick Spens, taught her children the good old ballads and the romantic stories in the Fairie Queen, and it was one of the poet's earliest delights to recount the adventures of Spenser's heroes and heroines to his playmates.

An equally important influence upon his early youth was the out-of-door life at Elmwood. To the love of nature his soul was early dedicated, and no American poet has more truthfully and beautifully interpreted the inspired teachings of nature, whispered through the solemn tree-tops or caroled by the happy birds. The open fields surrounding Elmwood and the farms for miles around were his familiar playground, and furnished daily adventures for his curious and eager mind. The mere delight of this experience with nature, he says, "made my childhood the richest part of my life. It seems to me as if I had never seen nature again since those old days when the balancing of a yellow butterfly over a thistle bloom was spiritual food and lodging for a whole forenoon." In the Cathedral is an autobiographic passage describing in a series of charming pictures some of those choice hours of childhood:

"One summer hour abides, what time I perched,Dappled with noonday, under simmering leaves,And pulled the pulpy oxhearts, while aloofAn oriole clattered and the robins shrilled,Denouncing me an alien and a thief."

Quite like other boys Lowell was subjected to the processes of the more formal education of books. He was first sent to a "dame school," and then to the private school of William Wells, under whose rigid tuition he became thoroughly grounded in the classics. Among his schoolfellows was W.W. Story, the poet-sculptor, who continued his life-long friend. Thomas Wentworth Higginson, who was one of the younger boys of the school, recalls the high talk of Story and Lowell about the Fairie Queen. At fifteen he entered Harvard College, then an institution with about two hundred students. The course of study in those days was narrow and dull, a pretty steady diet of Greek, Latin and Mathematics, with an occasional dessert of Paley's Evidences of Christianity or Butler's Analogy. Lowell was not distinguished for scholarship, but he read omnivorously and wrote copiously, often in smooth flowing verse, fashioned after the accepted English models of the period. He was an editor of Harvardiana, the college magazine, and was elected class poet in his senior year. But his habit of lounging with the poets in the secluded alcoves of the old library, in preference to attending recitations, finally became too scandalous for official forbearance, and he was rusticated, "on account of constant neglect of his college duties," as the faculty records state. He was sent to Concord, where his exile was not without mitigating profit, as he became acquainted with Emerson and Thoreau. Here he wrote the class poem, which he was permitted to circulate in print at his Commencement. This production, which now stands at the head of the list of his published works, was curiously unprophetic of his later tendencies....