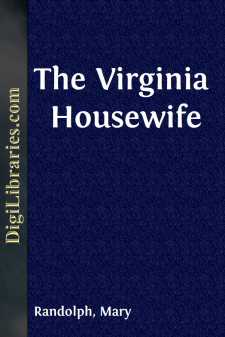 Take four large bunches of asparagus, scrape it nicely, cut off one inch of the tops, and lay them in water, chop the stalks and put them on the fire with a piece of bacon, a large onion cut up, and pepper and salt; add two quarts of water, boil them till the stalks are quite soft, then pulp them through a sieve, and strain the water to it, which must be put back in the pot; put into it a chicken cut up, with the tops of asparagus which had been laid by, boil it until these last articles are sufficiently done, thicken with flour, butter and milk, and serve it up.

Take the hind shin of beef, cut off all the flesh off the leg-bone, which must be taken away entirely, or the soup will be greasy. Wash the meat clean and lay it in a pot, sprinkle over it one small table-spoonful of pounded black pepper, and two of salt; three onions the size of a hen's egg, cut small, six small carrots scraped and cut up, two small turnips pared and cut into dice; pour on three quarts of water, cover the pot close, and keep it gently and steadily boiling five hours, which will leave about three pints of clear soup; do not let the pot boil over, but take off the scum carefully, as it rises. When it has boiled four hours, put in a small bundle of thyme and parsley, and a pint of celery cut small, or a tea-spoonful of celery seed pounded. These latter ingredients would lose their delicate flavour if boiled too much. Just before you take it up, brown it in the following manner: put a small table-spoonful of nice brown sugar into an iron skillet, set it on the fire and stir it till it melts and looks very dark, pour into it a ladle full of the soup, a little at a time; stirring it all the while. Strain this browning and mix it well with the soup; take out the bundle of thyme and parsley, put the nicest pieces of meat in your tureen, and pour on the soup and vegetables; put in some toasted bread cut in dice, and serve it up.

Get eight pounds of coarse lean beef--wash it clean and lay it in your pot, put in the same ingredients as for the shin soup, with the same quantity of water, and follow the process directed for that. Strain the soup through a sieve, and serve it up clear, with nothing more than toasted bread in it; two table-spoonsful of mushroom catsup will add a fine flavour to the soup.

Take the nicest part of the thick brisket of beef, about eight pounds, put it into a pot with every thing directed for the other soup; make it exactly in the same way, only put it on an hour sooner, that you may have time to prepare the bouilli; after it has boiled five hours, take out the beef, cover up the soup and set it near the fire that it may keep hot. Take the skin off the beef, have the yelk of an egg well beaten, dip a feather in it and wash the top of your beef, sprinkle over it the crumb of stale bread finely grated, put it in a Dutch oven previously heated, put the top on with coals enough to brown, but not burn the beef; let it stand nearly an hour, and prepare your gravy thus:--Take a sufficient quantity of soup and the vegetables boiled in it; add to it a table-spoonful of red wine, and two of mushroom catsup, thicken with a little bit of butter and a little brown flour; make it very hot, pour it in your dish, and put the beef on it....